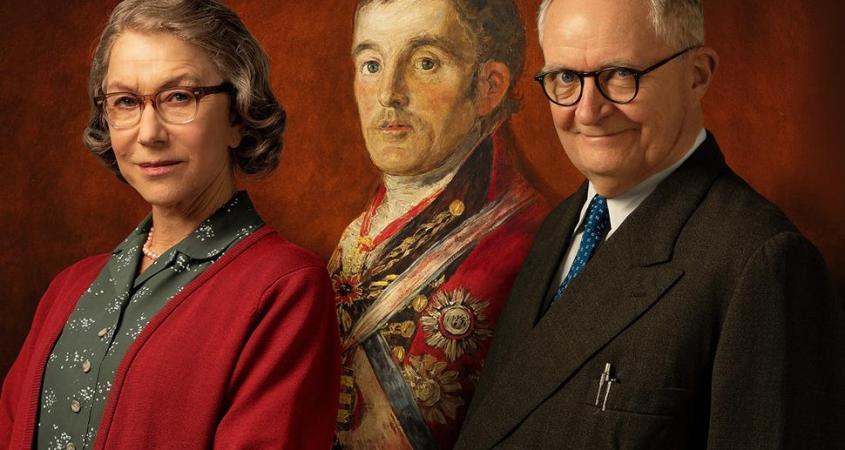 Full-time social reformer Kempton Bunton (Jim Broadbent) has a pet peeve: an annual levy on television receivers, without concession to age or poverty.  Concerned for old-age pensioners’ inability to afford the levy, Kempton is prepared to go to gaol, and has done so, over his refusal to pay it.  And he is outraged to learn that the National Gallery bought a painting for 140,000 pounds that could have paid for 3.5 million television licences for old-age pensioners.

When complaints reach the wrong ears that Kempton Bunton compulsively talks to his taxi customers, he finds time to take a two-day trip to lobby members of Parliament over the television levy.

Naturally, his local members and their minders are enthusiastic in their disinterest.

Then Kempton hits upon a daring plan that will make him a modern-day Robin Hood.

When the plot finally comes to light, Kempton has little prospect of avoiding a long term of imprisonment.  It is the court scene that is the centrepiece of the movie, as Kempton’s humanity and natural self-deprecating humour win over the public gallery, if not the judge, who believes in making examples.

This is a beautifully integrated movie, with nothing out of place.  The inimitable Jim Broadbent, as Kempton, and Helen Mirren, as his down-to-earth wife, Dorothy, make a fine comic pairing, Fionn Whitehead being well cast as their loyal son Jackie.  Matthew Goode, as Kempton’s barrister, Jeremy Hutchinson QC, himself embodies an officer of the court with an unusually light heart.

Filled with dialogue of a freshness and originality matching its surprising plot, The Duke had the audience chortling throughout.  It’s a heist movie that will make your day.