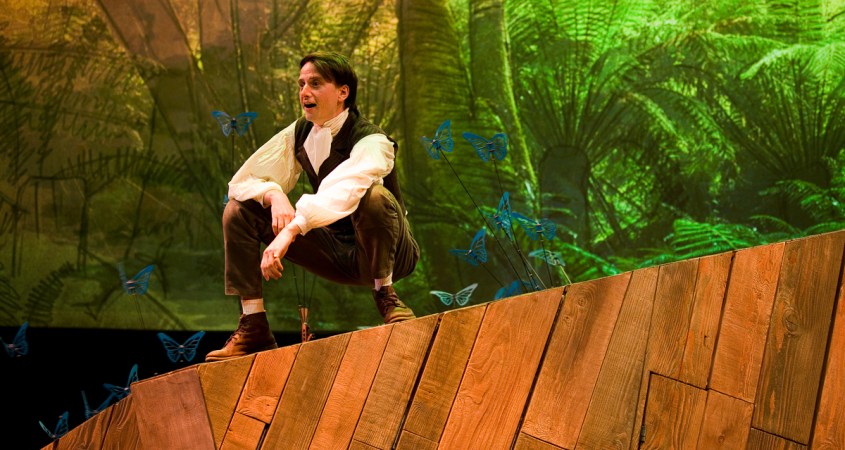 Its thematic basis lying in the contents of his journal published as Voyage of the Beagle, The Wider Earth dramatises the process of Charles Darwin’s exhaustive accumulation of the evidence for variation in the forms of all life on Earth over time and his dawning realisation that new species emerge through a process of selection for advantageous characteristics.

Without delving at all into the details of Darwin’s observations or reasoning, the play — whose characters include complex life-sized mechanical puppet animals as well as ten human characters — brings to life the wonder that Darwin found in both the variety within and the close relationships between species and the difficulty of this topic at a time when failing to attribute the origins of all species to a divinity could be construed as intolerable heresy.

The play itself is a choreographic multimedia ballet of marvels.  Scenes of shipboard drama and ocean rescue; meetings between Darwin and mechanically recreated animals; even meetings in the street: all occur with a natural fluidity that remains undisturbed as characters become puppetmasters who become stagehands transforming the cleverly adaptable set co-designed by Aaron Barton and writer–director David Morton.

The script’s fidelity is to the spirit of historical accuracy rather than to the letter.  Almost all personal exchanges, both in England and aboard ship, bear little relation to what actually occurred, and some events are portrayed as occurring well out of their sequence in reality, and this has the effect of portraying some characters differently from their actual characters.  But its progression of ideas, though sketchy, soundly reflect what Darwin actually wrote, even to his handwriting on watercolours and maps projected into the background.  Showing the foundations on which Darwin’s ideas rested — including deliberate creation of new animal breeds and plant varieties through artificial selection — the play serves as a very good basic primer in understanding evolution in its everyday variety.  But its chief attraction is that it does so in an engaging format that holds the attention of even the youngest audience members.