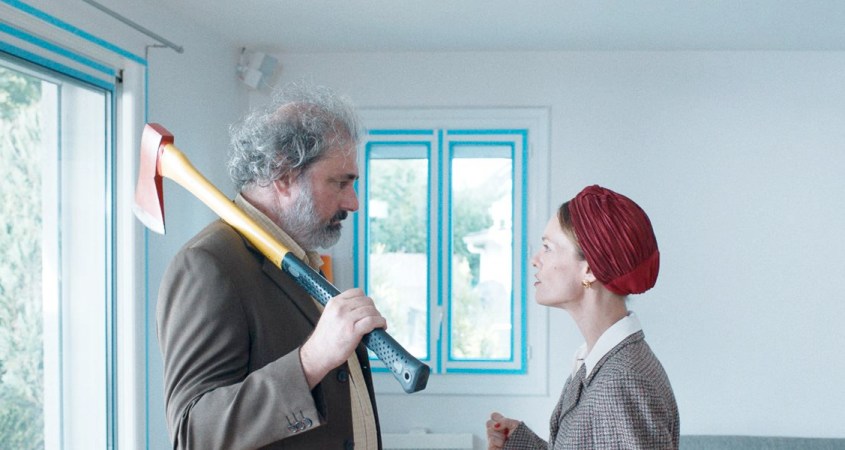 Jeff de Claerke (François Damiens) has joined a poetry class in which he recites his love poems for feedback from the teacher.  Jeff, whose workaday life entails organising a team of dockworker toughs, has found poetic motivation in 25-year-old supermarket cashier Roxanne (Constance Rousseau).  Worshipping her from afar, he enlists his friend Neptune (Ramzy Bedia) to deliver one poem after another to Roxanne and ask for her response.

Meanwhile, Jeff has more pedestrian problems.  A bunch of young punks is moving in on his territory at the docks; his accountant’s wife, Suzanne (Vanessa Paradis), derails an attempt by his friend Jacky (Gustave Kervern) to recover embezzled money; the forthcoming birthday party of his daughter, Jessica (Raphaelle Doyle), looks to be a disaster; and, of course, his wife, Katia (Valeria Bruni Tedeschi), may learn of his infatuation with Roxanne.  With all this, we follow unforeseen twists and turns within the other gang members’ lives as each tries, in his own somewhat inept way, to do what’s best.

It’s difficult to single out any actor for special praise in Love Songs for Tough Guys, every performance being a masterclass in bringing to life a likeable character’s inner passions and secret world and juxtaposing them against the challenges of his or her ordinary (if unrefined) life.  Rough and tough Jeff and his gang may be, but they’re friends whom people in a tight spot mightn’t mind having go in to bat for them.

The scripting of Love Songs for Tough Guys provides contexts in which unexpected subtleties appear in otherwise earthy conversation, making for extremely funny contradictions that its accomplished actors bring to life with perfect timing and authenticity in deadpan comic understatement.  Don’t miss it.