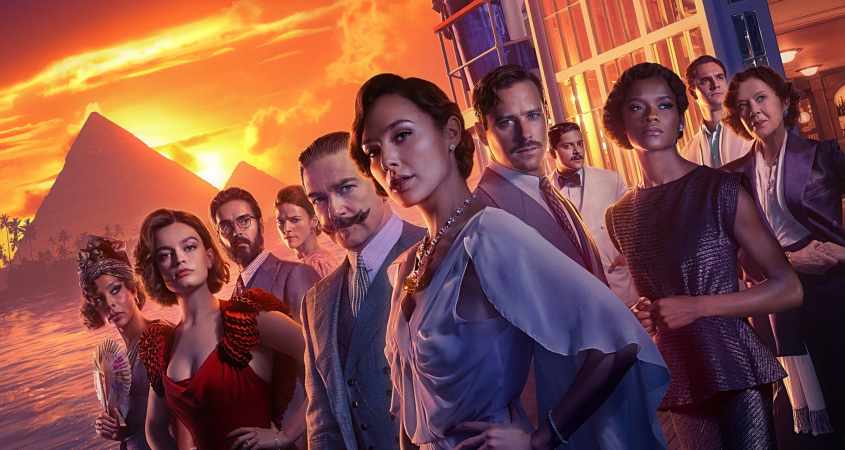 Ypres, Belgium, 1914, sees Hercule Poirot (Kenneth Branagh) in the trenches fighting alongside his fellows against the Central Powers.  His and others’ suffering over the next four years evidently has stayed with him when we next encounter him, in 1937, in a jazz club where jazz singer Salome Otterbourne (Sophie Okonedo) is performing.

It’s during this evening of entertainment that Poirot witnesses an extravagant dancing display by Jacqueline de Bellefort (Emma Mackey) and her fiancé Simon Doyle (Armie Hammer) that leave no doubt of their sexual tryst — soon after which Jacqueline’s childhood friend, heiress Linnet Ridgeway (Gal Gadot), arrives.  Jacqueline introduces Simon to her, and she is instantly intoxicated.

Fast-forward six weeks, and Poirot is vacationing in Egypt, where he happens upon old friends as well as the now newly married couple, Simon and Linnet, Simon having discarded Jacqueline to wed Linnet.  Uncomfortably, Jacqueline, unable to accept that Simon truly doesn’t love her, is conspicuously following the newlyweds from place to place on their honeymoon.

The stage now set for all kinds of skulduggery, the story moves on, with inevitable murders, multiple suspects — all with motives — and Poirot, the one who must unmask the secrets that will reveal who dun what and why.

The costuming is stunningly lavish, and, though the Egyptian monuments aren’t always entirely convincing, the indoor sets and decor are lush in their detail.  The cinematography, from the bleak battlefields of World War I to magnificent vistas of the Nile, movingly takes the viewer from horror to great, tranquil beauty.

Branagh’s Poirot, quite unlike Agatha Christie’s creation, is a sombre character, bearing psychological and emotional scars from the profound losses he suffered during the war.  Given this, Poirot’s egotism and perfectionism over minutiae — beloved characteristics of Christie’s Poirot — seem shoehorned into the Branagh version.  That aside, Branagh gives a subtly emotional performance as a man for whom love can never come again.

The remainder of the enticingly stellar cast give very creditable performances as the young, the privileged and beautiful, the bitter, the greedy, the repressed, the intolerant, the vengeful, and the falsely meek, bursting with hidden agendas.

Some casting choices are puzzling (as in using Dawn French and Jennifer Saunders to play relatively minor but serious roles without a hint of quirkiness), leading us to wait without reward for some display of the actors’ true brilliance.

Nevertheless, Death on the Nile is entertaining and beautifully reminiscent of the splendid opulence that displaced the bleakness into which the First World War and later the Great Depression had plunged the world.