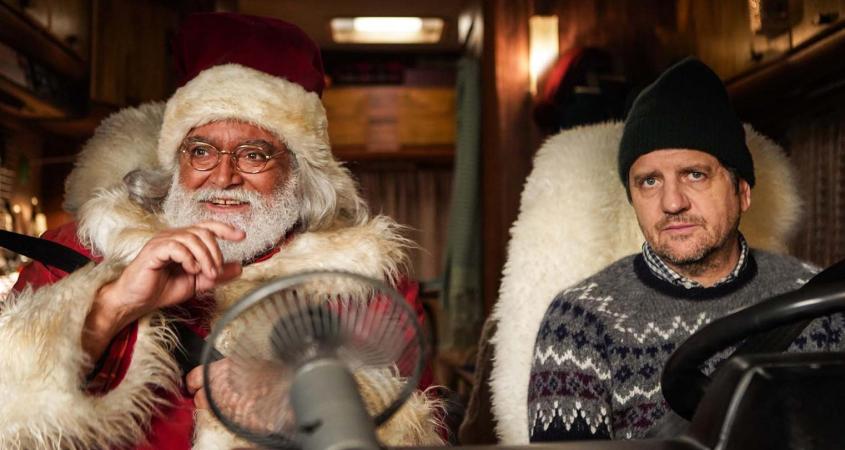 After a year or two as the dedicated homemaking parent raising the children, Carlo (Fabio De Luigi) feels the frequent absence of his wife, Giulia (Valentina Lodovini), and her growing unavailability to their children.  Carlo is also trying to return to paid work, a difficult prospect as employers seem to focus on how long he’s been out of the paid workforce rather than on his abilities.

At the same time, Giulia (Valentina Lodovini) is feeling unappreciated for her sacrifice of family time to long working hours.  But her career is taking off, and she is interested in a promotion that would see the family shift — unwillingly — to Stockholm.  Nobody is happy.  Carlo is especially unhappy that Giulia, who hardly sees the family as it is, will be away for her job interview at Christmas, a time he feels is especially important to a family.  When he suggests that they all travel together to Stockholm in the couple’s old campervan for Giulia’s interview, most of the family finds something to complain about.  But they climb aboard.

This family comedy takes good advantage of the foibles of the children, Camilla (Angelica Elli), Tito (Matteo Castelluci), and Bianca (Bianca Usai) to highlight the joys and sudden pains of parenthood as the film pits one child after another against either parent, and their parents against each other.  And then their trip is complicated by an unwanted responsibility to help an itinerant Santa Claus (Diego Abantuono).

Great fun for all ages, When Mum Is Away… With the Family takes the setup of its predecessor in an unexpected new direction.  The plot isn’t terribly complicated, but a combination of comic scenes and surprising scenery makes this gentle movie one worth seeing with the whole family.