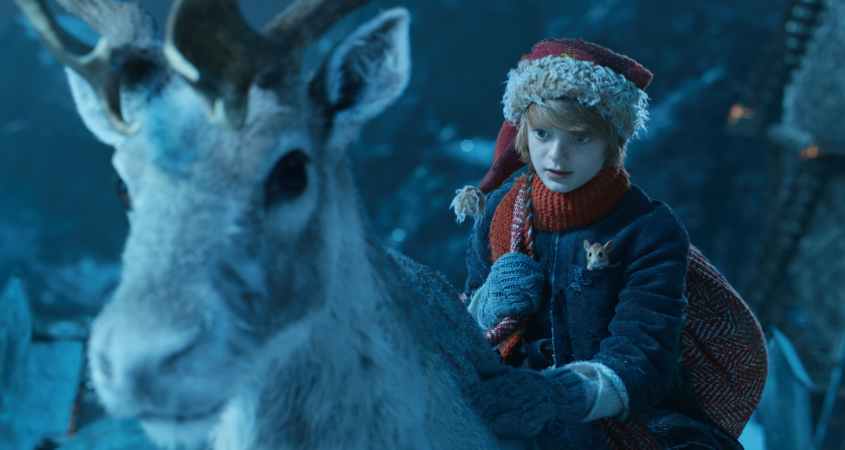 A magical tale within a tale, in which yet another tale provides the clues to finding the magic, A Boy Called Christmas concerns redemption and a quest for hope.

Opening with the mostly unwelcome arrival of their great-aunt to babysit three youngsters, the film really takes off as Aunt Ruth (Maggie Smith) tells the tale of the discovery of Christmas, commencing with the lives of a widowed woodcutter named Joel (Michiel Huisman) and his son Nikolas (Henry Lawfull) — whose mother’s nickname for him was Christmas.  Joel and Nikolas only just eke out a basic living in their wilderness cabin.  Then a mouse enters Nikolas’s life.

Summoned, along with many other locals, to the royal Palace, Joel and Nikolas (and his mouse) learn the plan of the King (Jim Broadbent) to restore the kingdom, which is to recover hope.  The King will pay anybody setting out to the declining kingdom’s borders and beyond to find any magical thing that will provide hope, with a considerable reward for returning with it.  And Nikolas convinces his father that the key may lie in a tale Nikolas’s mother used to tell, of a town of elves in the far north: Elfhelm.

But Joel won’t allow Nikolas to go with him.  Before setting off with friends to find Elfhelm, he calls on his sister, Carlotta (Kristen Wiig), to come and look after Nikolas until his return.  Unfortunately, Aunt Carlotta is so intolerant of others that she sends Nikolas outside to sleep in the snow.

When Nikolas accidentally discovers the exact route to Elfhelm, he braves the cold and the wildlife to pursue his father and show him the way.  Fortunately, he soon befriends a reindeer.

Based on Matt Haig’s book, A Boy Called Christmas invokes the Christmas spirit of generous fun less by speech than by the actions of many personalities memorable for their peculiarities and strength of character.  Filmed in Finland, Slovakia, the Czech Republic, and England, with a cast that also includes Sally Hawkins and Toby Jones, this fable of the origins of our celebration of Christmas delights the eye and ear with its elven architecture and its inventive characters’ strong performances.  Showing the considerable power of empathy to heal hurts and spread joy, A Boy Called Christmas employs scenery, fantasy characters, plot twists, special effects, and colour with vivid imagination.  It’s a Christmas treat for the entire family.

Screening at Palace and Hoyts cinemas.