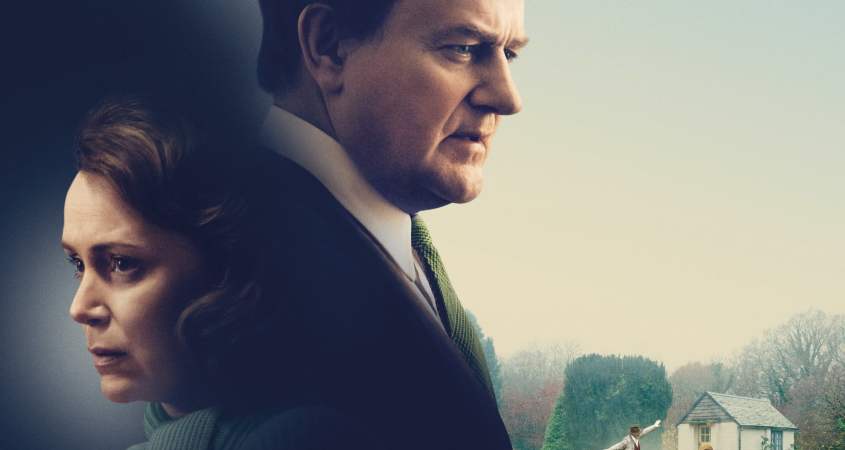 In post–WW II England, children’s writer Roald Dahl (Hugh Bonneville) and his celebrated film-actress wife, Patricia Neal (Keeley Hawes), have come under financial pressure.  Low initial sales on Roald’s children’s novel, James and the Giant Peach (which went on to become an international hit), along with lack of film work for Patricia, who is caring for the three young Dahl children, has the family under strain.  But Roald doesn’t seem overly concerned; he has his elder daughter and co-conspirator, Olivia, as inspiration.

When tragedy strikes, Roald’s sublimation of grief turns it into anger.  Becoming recklessly self-destructive and thoughtlessly cruel, he brings the family to the edge of destruction.

Yet everybody involved is well intended.  And the help of Patricia, the insights another of his children offer, and even the inadvertent help of Roald’s zealous ex-headmaster, eventually calm his anguish.

Though he always remembered what it felt like to be one of them, the real Roald Dahl claimed to dislike children; but Bonneville’s Roald Dahl seems to have a genuine rapport with his enthusiastic younger readers, and Bonneville makes him a likeable character.  Darcey Ewart as the playful Olivia; Isabella Jonsson as Tessa Dahl, the sister patiently suffering obvious favouritism; and Keeley Hawes masterfully portraying Patricia, a devoted wife and mother with a suspended career and an increasingly fragile husband make for a quartet whose believable, eminently sympathetic characters create an engaging tale of recovery from the slings and arrows.

After directing few feature films in the past couple of decades, director John Hay has turned out a moving, insightful portrayal of how a marvellously creative family regained its feet through the power of self-awareness and forgiveness.  This worthy production, filmed largely in the English countryside, with extraordinary visual and conversational subtleties, has an unusual naturalness in characters and timing and is edited beautifully.  It’s well worth seeing.