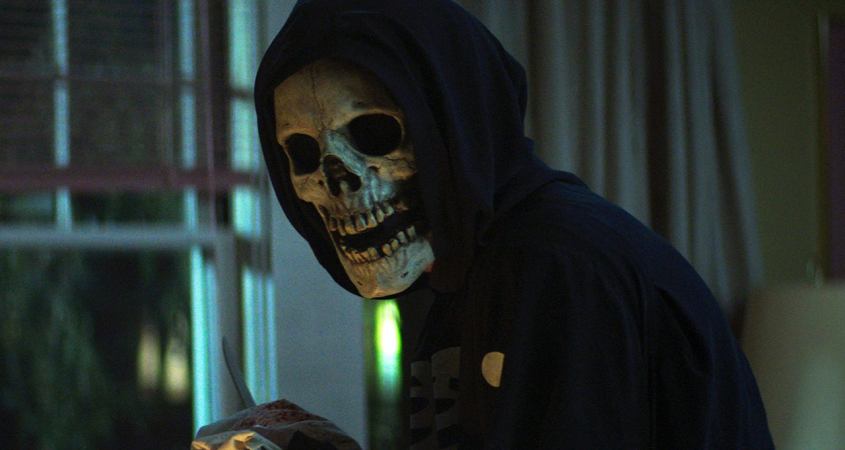 Not many film franchises get a chance to grow with their audience. James Bond is stuck in an endless reboot loop. The Fast and the Furious saga is in cruise control. And the Harry Potter series got shaggier and moodier but, hey, that’s high school.

The concept? Take R. L. Stine’s (yes, the Goosebumps guy) young adult book series, first published in 1989, and adapt them as an R-rated trilogy of films: Fear Street: 1994, Fear Street: 1978 and Fear Street 1666. So, the teens who once read the books are now old enough to indulge in full on blood splatter.

Fear Street – a glow up and a gore up

Fear Street splits the story across three eras and it’s a tale of two towns: Sunnyside and Shadyside. The town rivalry is like The Simpsons Springfield and Shelbyville beef. But in Fear Street there’s 200 per cent more death threats.

Sunnyside is upper class and Shadyside is lower class.

Yes, as you probably suspect, there is nothing subtle but that’s part of the appeal of its self-aware hyper melodrama. The Shadysiders suspect their ongoing misfortune is the result of a curse. It gets off to a stabby start in the ‘90s when a series of murders leads a group of teenagers to investigate the town’s past.

Fear Street: 1994 and Fear Street: 1978 stands on the shoulders of slasher giants like Scream and Friday the 13th but director and co-writer Leigh Janiak (Honeymoon) doesn’t try to outsmart those iconic franchises. Instead, she embraces the thrill of the contract you sign when you decide to watch a slasher.

Janiak sets up Slasherville, USA, where there are multiple masked killers, which ups the stakes of the plot kind, as well as the kind that goes through people’s chests, faces and limbs.

At times, the first two films feel like a cross between Jumanji and Halloween and each period setting is potent with nostalgia – the Stranger Things effect – as the result of the blunt force song choices.

Once you get to …1666 the series relies more on supernatural elements and ye olde unease, and loses the previous nostalgic slasher thrills.

In the scope of the trilogy, it’s what Janiak and co-writer Phil Graziadei don’t do that stands out the most. They don’t always follow the traditional character archetypes of a slasher. There are final girls, plural. There’s better representation when it comes to race and sexuality but they never grandstand – it’s just the way it is. The connection to these characters allows for genuine heartbreak with each cruel twist of fate rather than the urge to join Team Masked Killer.

Fear Street hacks and slashes its way through familiar film ground, but there’s a youthful vibrancy to the way it leverages Stine’s brand of bubble-gum horror for both die-hard fans and the ones who crave the cheap thrills of a slasher.

You can watch Fear Street now on Netflix.