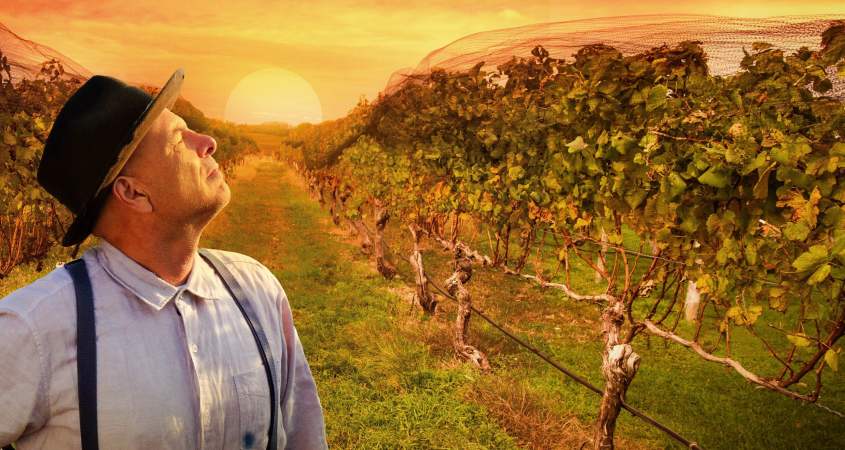 Marco Gentile (Joe Pantoliano) spent his boyhood with childhood friends Luca and Amelia in and around his grandfather’s vineyard in Acerenza, Italy, before leaving as a young man for Canada.  There, by his sixties, Marco, now Mark, has become an executive in a company manufacturing motor vehicles.  He reaches crisis point when his new boss forces him to recant on a commitment to the company’s retiring C.E.O., Gordon (Frank Moore), of making the company’s products environmentally sustainable.  In moral disgust, Mark quits the company and buys his wife, Laura (Paula Brancati), and himself open-ended tickets to Acerenza and the vineyard he inherited years earlier from his grandfather, departing Canada on the day after he departed the company.  Laura understandably cannot leave on such short notice, and, feeling compelled to seek his moral centre without delay, Mark goes by himself.

This is Mark’s first return to his childhood home in the 45 years since he left it.  But Mark, now becoming Marco again, soon reconnects with his childhood friends Luca (Marco Leonardi) and Amelia (Rita del Piano), is remembered by others, and makes new friends in his grandfather’s former winemaker, Marcello (Tony Nardi), and a rough but charming squatter, Enzo (Tony Nappo).  Rediscovering his boyhood love of the Acerenzan countryside, Marco envisages bringing new life to the vineyard, which Marcello has kept from utter ruin.  Effecting that vision, though, will require overcoming the locals’ gentle cynicism and some bureaucracy.  It is in satisfying the bureaucracy that Mark sufficiently alarms his wife that she and their daughter finally come to Acerenza to try to return Mark to his senses and his Canadian home.

From the Vine reminds us of there being more to life than succeeding in impressing others.  It’s readily classifiable as a paean to winemaking and friendship; yet the film stretches itself to offer something more substantial.  By conveying an almost tactile sense of how Marco comes to grips with the down-to-earth community of his childhood and forms a deepening relationship with the lively personality of the vineyard itself, director Sean Cisterna’s quirky but heartfelt approach to storytelling works a sweet piece of magic: through it, we ourselves experience the very transformation that nature works on the perception and identity of the film’s subject.  In working that magic, what From the Vine specifically reminds us of is the personal importance to us of childhood, of nature, of contribution, of thinking for ourselves, and of immersion in the experience of truly living.