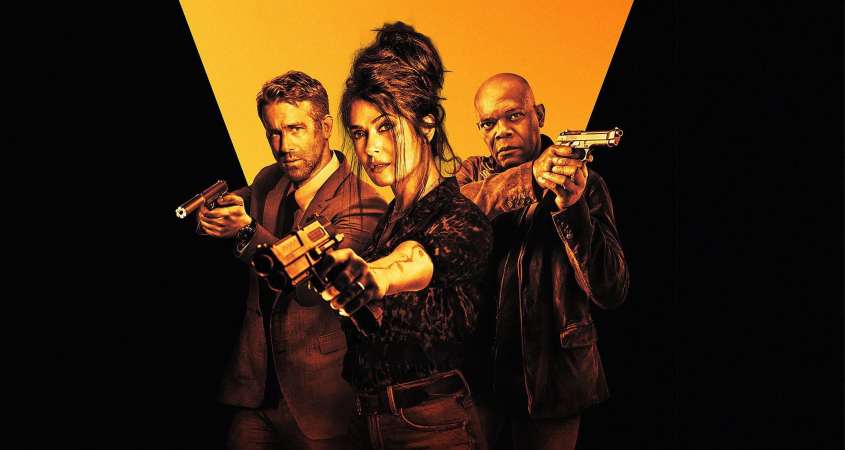 Bodyguard Michael Bryce (Ryan Reynolds) is trying to come to terms with the demons haunting him since his assignment as Darius Kincaid (Samuel L. Jackson)’s bodyguard.  Bryce’s therapist assures him that he needs to take a sabbatical from bodyguarding, with no violence, no guns, no weapons of any kind.  Bryce needs to find out who he is.  But, just when Bryce has committed himself to follow his therapist’s advice and taken to the beach, Darius’s wife, Sonia Kincaid (Salma Hayek), launches herself into his life and gives him no choice but to help her recover her hitman husband, who has gotten on the wrong side of some mobsters.  Nothing if not loath to help the wife of the man responsible for his breakdown, Bryce nevertheless speeds from one catastrophe to another in the wake of the frenzy that is Sonia.

Meanwhile, evil mastermind Aristotle Papadopoulos (Antonio Banderas) is bent on destroying the European power grid in retaliation for the European Union’s proposed sanctions against Greece.  Interpol gets involved, but so does the FBI, setting its sights on Bryce and the Kincaids, leaving the trio an uncomfortable option as its price for continuing freedom.

The Hitman’s Wife’s Bodyguard hurtles from one killing to the next, but there are plenty of funny moments along the way, especially with the long-suffering Bryce finding himself stuck with hitman Kincaid, who apparently hates him, and with Kincaid’s terrifyingly loving wife.

Terrific performances all round, heroes to admire (not many of them, though), villains to despise, and imaginative action sequences interspersed with what we might — at a stretch — call quieter moments make The Hitman’s Wife’s Bodyguard great fun from start to finish.  For a rollicking good time, don’t miss it!