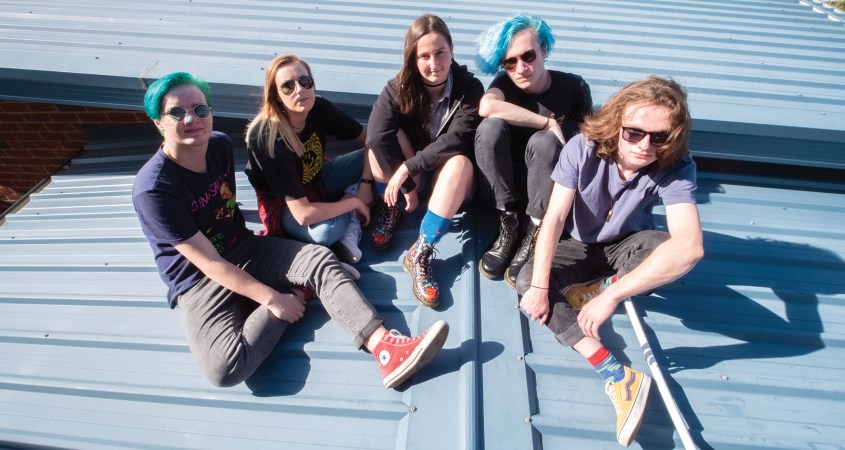 Chins are a Canberra-based alternative rock band, having released a double-A side featuring Margo and Bojack earlier this year.

If one were compelled to give an all-embracing description of the sound, one could use the terms punk or grunge, but there’s a lot more going on here than any abridged genre can provide. Between the interweaving ululations of the noise guitars and the cosmic contemplations of youth angst, there are cadences of subtle power and true-to-form authenticity.

And we all love that.

As well as a subtle uniformity, there’s a diametric curve that covers a lot of ground. There are some persuasive delights for the lovers of frenetic rambling post-punk during Margo, and for those with a penchant for a less explosive but not less intense experience, there is Bojack.

The vocal duties on the latter are performed by Madie Cook, who does a splendid job of reigning in a searing urgency, utilising a discursive melodic centre upon which the song swirls. With enough vulnerability to provide a formative counterweight to the relatively untethered but nonetheless effective band behind her, Madie’s performance is what draws us in, in turn tethering us to the band’s miasmic flame.

In contrast, though not incoherently so, is the partnered track, Margo. This side of the band gives in to some healthy punk grunge tendencies with perhaps more of a lean towards grunge. Utilising another of the band’s vocalists, Margo has a corrosive, enervating aesthetic that wears its peeves and petulances on its sleeve.

And that’s healthy, of course.

Many of the same snarling guitar parts that populate Bojack appear on this one, with the difference being their ability to double up on the tangible vexations issuing forth from the vocal performance.

What stands out here, on both tracks, is the band’s concerted energy and self-assuredness, all intact while maintaining an idiosyncratic, emergent edge.