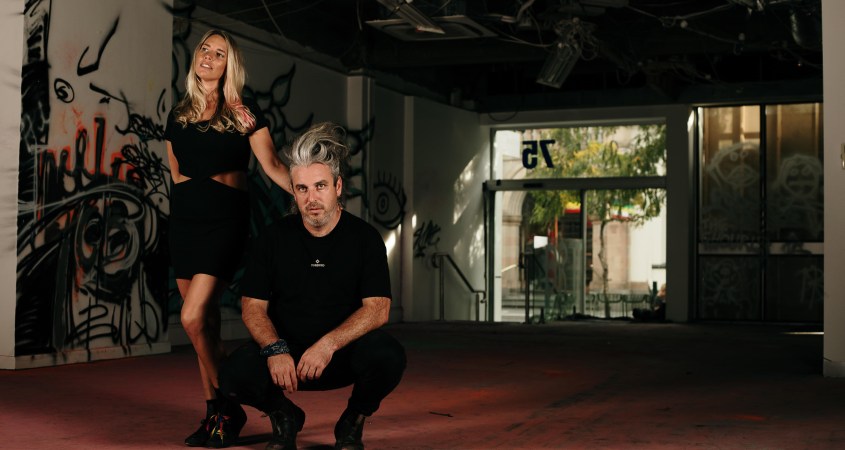 We’re the kids of the 21st century mayhem
locked up, locked down
control the air we breathe in

Now we get it.

And soon, we get more of it.

With a verse melody delivered in a manner somewhere between tentative rap and spoken word, the world of The Buzz Kills opens up. The band is fronted by Nathalie Gower, who is aided and abetted by Sam Haberle on bass. A recent Christmas collaboration with Jam Mountain Music, Light A Candle (all proceeds going to charity) hit #4 on the ARIA charts, #1 on the Australian Independent Charts, and #23 Worldwide. The new track also follows recent singles Liar (2020) and Loving You (2021).

When asked about their style, the band offers this: “Uniquely identifiable sound, pop with a twist of rock.”

Well, there are certainly many twists with 21st Century Mayhem, in as much as elements from a flotilla of genres are seized upon to provide a musical palette that, deliberately or not, reflects the thematic concerns of the lyric.

As we listen further we hear this:

Brainwashed by the media
Could the world get any crazier?

A very pertinent question indeed. The world can get a little crazier—and probably will.

And in the chorus, The Buzz Kills do get a little crazy. They forgo the up till now straight, governing rhythm for a kind of open-ended barrage, a chorus hook that relies heavily on a well-worn chant but one that is, fortunately, rescued by sustained guitar strikes—I can see the Townshend windmills now—an all-over sonic wash that’s reminiscent of something the Slight Bells might do.

In said chorus the instrumentation joins in on the whole note accents, with bifurcating snare fills in between, along with, at some points, Gower dreamily urging us on.

The bottom line is, at least some vestige of punk spirit pushing against authoritarian forces is out there, alive and well. Perhaps we need it more than ever, who knows?

Gower’s father is singer/songwriter Richard Gower, lead singer of Racey, writer for Hot Chocolate and others in the ’80s. And if that’s not enough curious background information, Gower and Haberle are both ADHD. Is that a compelling enough formula for creating indie-pop rock gems? Who knows, but as The Buzz Kills warn:

something big is coming
welcome to the new world order