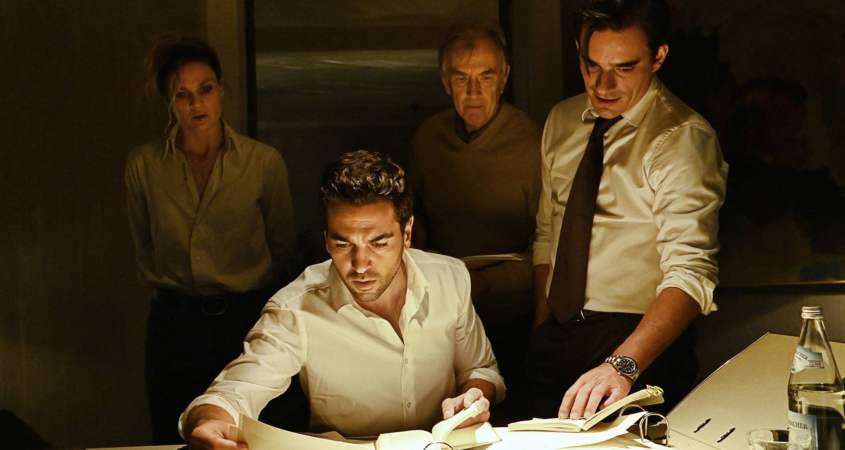 It’s 2001.  Wealthy industrialist Hans Meyer (Manfred Zapatka), much loved by his family, is inexplicably murdered in his hotel suite.  Fabrizio Collini (Franco Nero), an Italian who has been working in Germany for 35 years, is arrested and put on trial for the murder.  Newly minted lawyer Caspar Leinen (Elyas M’Barek) is appointed to defend Collini, only to discover that the victim, Meyer, had been Leinen’s own mentor and supporter since childhood.  Three further complications soon arise: Johanna (Alexandra Maria Lara), Meyer’s devoted granddaughter, once romantically involved with Leinen, is appalled by what she sees as betrayal when Leinen refuses to abandon the case; the lawyer for the prosecution is none other than the legendary Richard Mattinger (Heiner Lauterbach), a formidable courtroom opponent and Leinen’s former professor; and Collini refuses to speak.

Determined to do right by Collini, Leinen leaves no stone unturned in defending his client and pursuing the truth.  And in the unravelling of that truth lies the nub.  When is killing murder, and when it it sanctioned?  What is justice?  And what happens when we conveniently shift the goalposts to suit our own ambitions?

Franco Nero as Fabrizio Collini is unforgettable.  Although he rarely speaks, his performance is utterly compelling.  Manfred Zapatka as Hans Meyer convincingly transforms into a deeply disturbing figure, whilst Heiner Lauterbach as Richard Mattinger is everything we’d expect from a clever, successful, and self-serving, self-satisfied member of the judiciary.  Elayas M’Barek gives a brilliant performance as Caspar Leinen, the young lawyer who initially is driven to make his mark in the world but soon becomes an immovable moral force unwilling to resile from his belief that everyone has the right to a fair trial.

With remarkable performances all around, The Collini Case brings deeply important and challenging issues to life, leaving the audience both judge and jury. A not-to-be-missed morally provocative film.