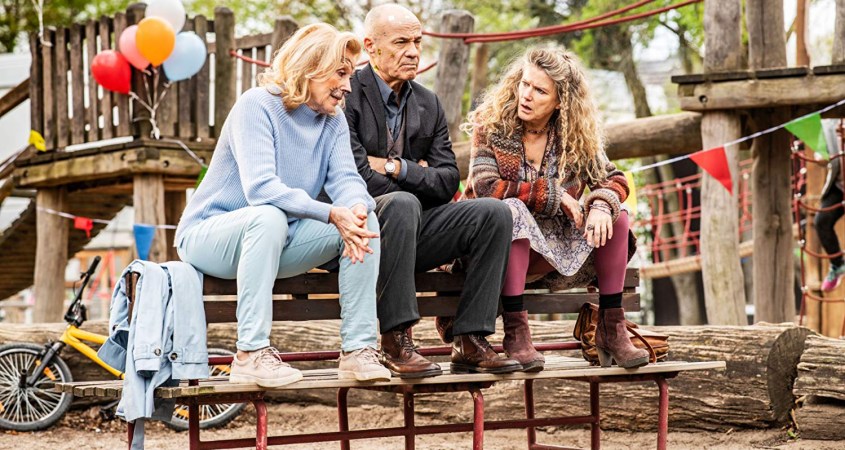 Philippa (Barbara Sukova), long estranged from her own daughter and granddaughter, has been “grandparenting” children through an agency and encourages her sister-in-law, Karin (Maren Kroymann), to do the same.  Karin has retired in order to travel with her husband, but retirement is boring her mindless. Iffy at first about grandparenting, provocation by her husband makes up her mind to give it a try. Then, chancing upon an old friend, Gerhard (Heiner Lauterbach), who not only is grieving over his partner’s death but has also just lost his dog, Karin encourages Gerhard to join her in the enterprise. It’s something Gerhard could not be less interested in, as he dislikes children.  But by happenstance he encounters the very boy, Viktor (Bruno Grüner), who — as his mother, Elena (Palina Rjinkski), points out — could most benefit by his life experience, and reluctantly agrees to trial it for a day.

But with two generations between the “grandchildren” and their new “grandparents”, there’s a lot of room for misunderstanding and for even sensible people such as Karin and Gerhard to get things drastically wrong.  As for Philippa: she horrifies Leonie’s parents, even before they realise that Philippa is a disaster waiting to happen.

The characters of all the children, parents, and “grandparents” about whom this tale revolves are depicted with surprising realism despite all being very different.  Nobody is so purely one thing or another as to defy belief, and the interactions of their various personalities provide great comic fare.  The tale is enriched too by many small delights: the integrity of a child, the vulnerability of a seasoned adult, the insights that various characters provide into what makes life worth while.  Grandparenting 101 makes worthy viewing for the entire family in need of a good laugh.