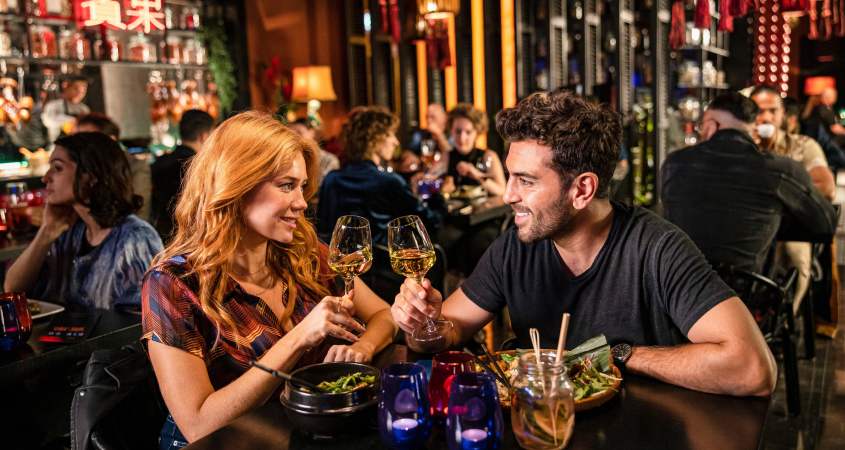 Best friends and fellow bartenders Milo (Elyas M’Barek) and Renzo (Frederick Lau) dream of establishing their own nightclub.  But Renzo, used to seeking a quick buck wherever he can, cannot wait, and in order to obtain the necessary funds attempts to do an illegal delivery job.

Naturally, that does not go well.  As a consequence, Renzo and Milo are on an urgent deadline to replace the losses: a task seemingly impossible until Renzo comes up with another brilliant plan.

In the meantime, Milo has met Sunny (Palina Rojinski) on the eve of her removal to a distant city.  Sunny, having sworn off romance and assessed Milo as romantically risky due to the hours he keeps, resists his invitation to go out.  It is only wth difficulty and by the intervention of fate that she eventually agrees to meet him for one dinner in order to get to know him.

But dinner doesn’t end well either: having located both Milo and Renzo, various thugs send the three of them running. Fortunately, when they need it most, Renzo finds help of the most inept kind!

Though various crimes are committed in it, this isn’t a crime movie.  Rather than delve into modus operandi, it capitalises on how the leads’ personalities will naturally respond to this setup.  Both Milo and Renzo love the fun of the night life, but their contrasting characters — Milo serious and sensible, and Renzo, with his renowned poor judgement — pull them in very different directions.  Of course, much of the fun comes of seeing how they manage to succeed as well as how they fail.  And the characters of the thugs and a friendly policewoman grease the wheels of the roller-coaster ride.  With laughs aplenty and without significant flaws in plot, Nightlife is a great deal of fun.