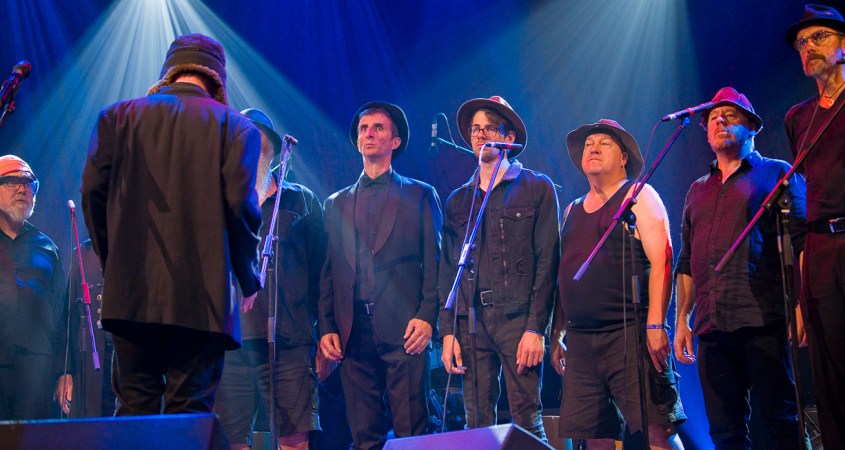 The characteristics that contribute to The Spooky Men’s Chorale’s wonderful silliness are many and varied, ranging from postures of contemplation and artless expressions of surprise to its members’ sincere vulnerability in singing on topics as deep as Jim the Lawnmower Man. Anybody who has attended one of the Chorale’s concerts knows that there’s something very special about its live performances: partly a matter of audience affection for the group, partly one of the apparently genuine spontaneity that erupts either from a Spooky member’s emotions or from spookmeister Stephen Taberner’s offbeat sense of humour.

The Spookies’ Gungahlin College Theatre performance was typical of the group’s style in both meeting and defeating audience expectations. Notwithstanding the endearing self-deprecation and apparent ineptness throughout, the performance’s every aspect illustrated professional polish, from individual facial expressions and shuffles to the notes their voices carried.

Though this seems never explicitly acknowledged, it’s clear that the genius behind both the sound and the masterful visual performance is its ever surprising spookmeister. Stephen Taberner’s talent extends not only to original — and, somehow, always fresh and always funny — introductions to the chorale’s songs but also to vocal arrangements of consistent perplexing richness, whether as apparently simple and stolid as old favourites “We Are Not a Men’s Group” and “Not Pretty Enough”, or as simply unbelievable as “Universal Club Song”, or as complex and moving as “Crossing the Bar” — for which Taberner appropriately credits Alfred, Lord Tennyson for the poetry, Rani Arbo for the composition, and Craig Morgan Robson for the arrangement he adapted for the Spookies. And, whilst many of the Spookies’ songs are not originals, many others clearly are uniquely their own — again, largely Taberner’s understated genius at work.

Whether your tastes extend to the music of Casey Chambers, James Taylor, or Tom Waits, The Spooky Men’s Chorale will enrich your experience of it with its irrepressible humour, brilliant musicianship, and unremitting inventiveness. And there’s a live atmosphere that even YouTube videos don’t capture — in part because your fellow audience members’ appreciation is something you can feel only by being there, and in part because the performance is so multidimensional and heartfelt and rests on the flicker of an eye here and there. And it’s the atmosphere as well as the wide-ranging variety of music that the Spookies tackle that will keep you coming back to renew the friendship time and again.