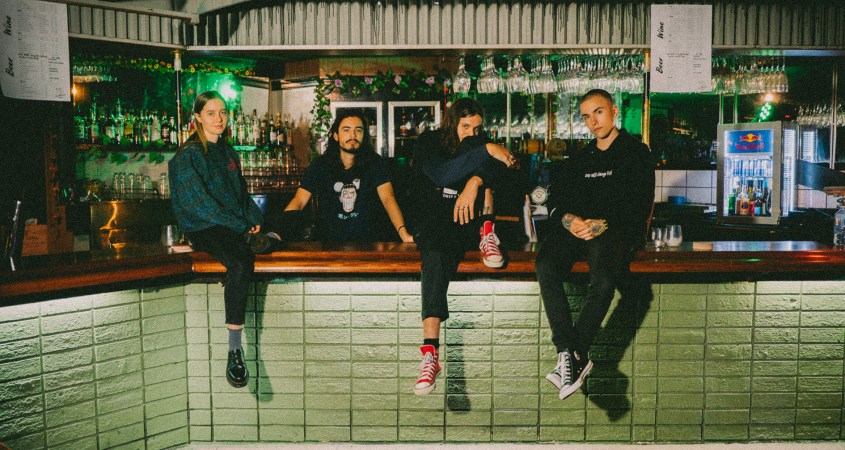 In support of their new release, Jealousy, Sputnik Sweetheart will be hitting the road for a massive five-stop east-coast tour, hitting Brisbane, Sydney, Wollongong, Canberra and, finally, Melbourne. The new track arrives in the wake of rave reviews for their last single, Rolling, from many quarters, including Triple J, Tone Deaf, and their ever-growing army of fans.

The four-piece alternative rock band, formed in 2018, is primed to continue on their skyward trajectory with Jealousy. Sputnik is in fine form here, displaying a level of restraint and inventiveness that is casually alluring without sacrificing any indie-rock energy.

Where do we begin?

The intertwining guitar lines are an excellent starting point. But let’s go to the introductory identifying key guitar riff, a cohesive blend of single notes and chord twists, enabling a raw and unfettered playfulness that becomes a suitable bed for another of Nette France’s ethereally buoyant vocal performances.

The verse melody here echoes the guitar riff, a juxtaposition as soft-edged as the lyric is affably deliberate. A couple of cycles in, and we’re faced with the chorus, a stirring encapsulation of kinetic instrumentation and melody, the drum part taken up a notch with the collective effort stamping a tender grandiosity onto the overall impact.

As we’re led into the second verse territory, our listening fates are sealed. For me, this was secured after hearing the line: ‘I won’t let you eat alone on Christmas eve’. That’s the kind of line I want to hear; a romantic tension wrapped in a subtle humorous declaration.

What we expect—another chorus to appear—does so of course, but in another form; a subdued version of it, a sleight-of-hand which not only reveals the part’s melodic strength but its vulnerable one too.

But the fully armed chorus does eventuate, only by leading us firstly into a beautifully climactic half-time bridge, a sensual peak that transforms more exquisite guitar work back into a chorus.

Sputnik Sweetheart has delivered yet again— Jealousy is a splendidly potent indie-rock experience.