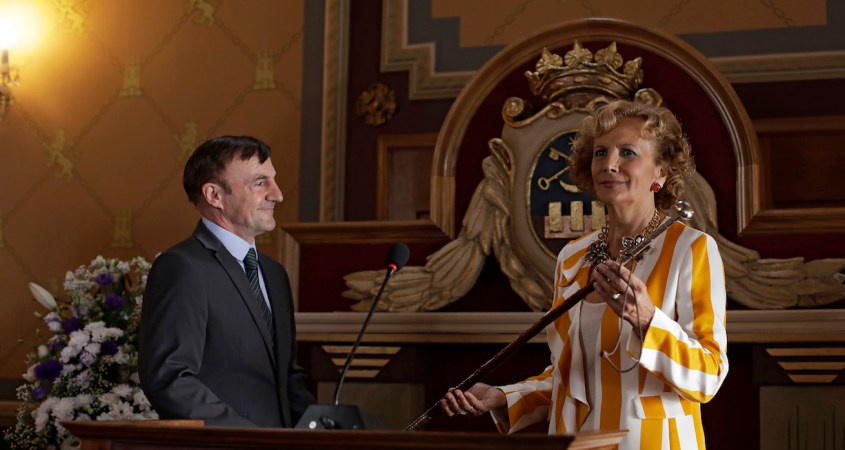 Patrizio Etxebeste (Ramón Agirre) has been mayor for too long, and far too comfortably, when he learns that he may be publicly disgraced and imprisoned over his kickbacks, and is persuaded to resign from office.  He’s not giving up the power behind the throne, though: he will hand over to his son, Iñaki (Iban Garate), and keep things rolling along nicely — or so he thinks.  With no interest in taking office unelected, Iñaki flatly refuses.  Patrizio’s wife, María Luisa (Elena Irureta), on the other hand, has long been interested in doing something useful with the office; so it is María Luisa who becomes the interim mayor, and Patrizio expects the easy life to remain essentially undisrupted.

Unfortunately for Patrizio, María Luisa takes office meaning to make the town work properly — beginning with her own office’s contractors — upsetting the local mobsters, Ernesto (Javier Tolosa) and Alejandro (Zorion Eguileor), to whose way of life the mayoral contracts’ largesse is essential.  If he is not to lose his wife to the sharks, Patrizio must succeed in putting a stop to the reforms.  But even his former secretary, Sara (Ane Gabarain), won’t give him the time of day.  To what means must he stoop?

In Bye Bye Mr Etxebester!, we encounter a theme that will be familiar to devotees of European film, the comedic attempt to clean up the corruption of city officials, from a new tangle: the transformation of the marriage between mayor and ex-mayor by their reversal in public roles; the added spice of the mobster threat; and the optimism that words can inspire.

Elena Irureta, as the non-nonsense idealist María Luisa, is the perfect foil for Ramón Agirre’s rather dishonest Patrizio Etxebeste.  Adding to the film’s charm are the deadpan performances by Iban Garate, as the straight up-and-down son, Iñaki; Paco Sagarzazu, as Patrizio’s loveably eccentric father; and the malevolent mobsters played by Javier Tolosa and Zorion Eguileor.

You can be sure that everyone making this film had a ball.  Be sure to catch it if you can.