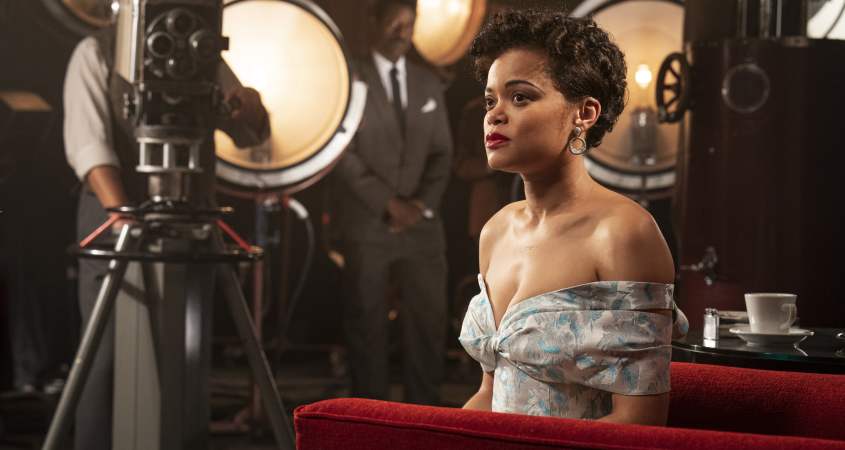 The United States vs Billie Holiday opens in 1947, when American jazz and swing singer, Billie Holiday (Andra Day), is at the peak of her fame, including for her singing of “Strange Fruit”, a song based on a poem by Abel Meeropol about lynching.  Harry Anslinger (Garrett Hedlund), Federal Bureau of Narcotics commissioner, unable to intimidate Holiday into stopping singing the song, determines to find a way to destroy her.  He sets out to have her arrested on drug charges, claiming that her singing of “Strange Fruit” will feed the troublesome civil-rights movement.

From here the roller-coaster of highs and terrible lows, abuse, and repeated betrayals play out to the inevitable end when Holiday dies of complications of cirrhosis of the liver, aged 44.

The film delves into Holiday’s unenviable childhood, but its surrealist approach to it creates perhaps more a distraction than a heartfelt revelation.  And, in creating additional drama, it is in parts historically questionable.  Nevertheless, there is a lot to like about it, including the fabulous couture, jewellery, and theatre settings in lush colour, which beautifully re-create the New York jazz scene of the 1940s and early 1950s.

Andra Day gives a riveting performance as Holiday, one all the more remarkable in that she sings Holiday’s songs herself.  Day’s Holiday isn’t always likeable, but her unsentimental toughness is completely understandable, and her almost palpable strength cannot fail to draw admiration.

Though not a particularly happy film, The United States vs Billie Holiday does enthrall.  Conveying through riveting performances the tense atmosphere of Holiday’s entertwined personal and work lives, the film succeeds in highlighting Holiday’s performing brilliance — and the stark realities of the price she paid for being black.