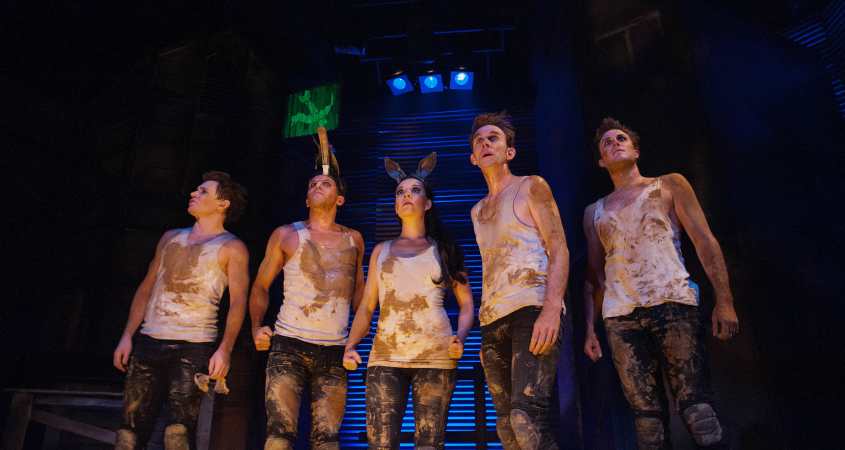 One of George Orwell’s greatest works, first published in 1945, was the novel Animal Farm, which Orwell uses to comment on the Russian Revolution of 1917 and the Stalinist era’s subsequent horrors.

The story is set on Manor Farm, run by the cruel drunkard farmer, Mr Jones. Seeing the terrible conditions in which the animals live, Old Major, an elderly boar, urges the animals to revolt, convincing them that they could all live good lives in which all animals are equal.

The animals rally and overthrow Mr Jones, who flees. But Old Major dies, taking his wisdom with him.  Still, with plenty of food, shelter, and freedom, life improves for the animals. This happy period is cut short, though, by the steady rise to corrupt power of a group of pigs, led by Napoleon.

This stage adaptation of the novel emulates Orwell’s focus on suffering, idealism, indoctrination, and the revolving door of corruption, greed, cruelty, betrayal, and even greater suffering and hardship with considerable veracity as the animals are slow to recognise how down-trodden and deluded they are.  And, as those who remember the past die, fewer and fewer are left to pass on the lessons of history.  Those in the present cling to their false beliefs, irrespective of the costs to them.

The production features five actors who slip easily from one character to another by the use of simple costuming accessories and by casting the illusion of various animals through pose and movement.

Although the lighting was largely apt in creating the sorry state of the lives of the animals, it could have benefitted by some variation, for example, brightening during those times when the animals naïvely grasped a vision of a fair and equitable future.  The other aspect that would have made the play much more poignant is variation in pacing.  Quiet moments to allow the audience to breathe, reflect, and mourn would have enhanced the audience’s emotional experience.

Nevertheless, the actors’ timing, diction, physicality, and seamless performances brought Orwell’s Animal Farm to life — important because, regrettably, it is as relevant today as when Orwell penned it.