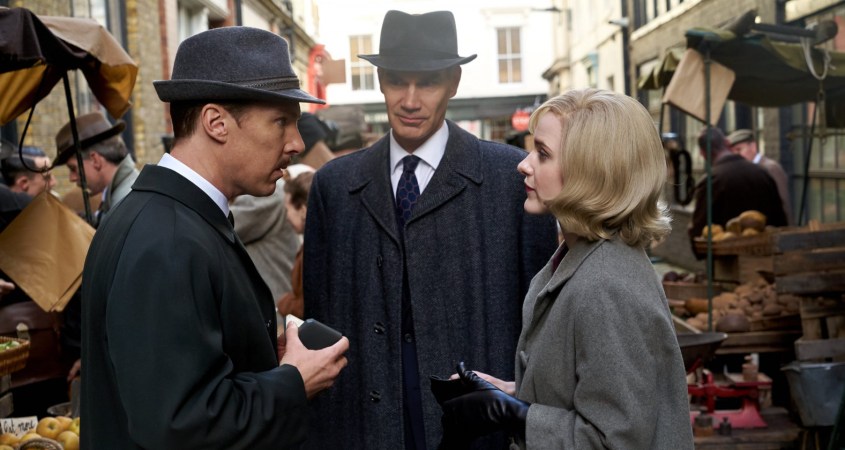 In the midst of the Cold War, as the Cuban missile crisis builds, MI6 agent Dickie Franks (Angus Wright) and visiting C.I.A. agent Emily Donovan (Rachel Brosnahan) decide they need a British businessman to make contact with Soviet Government minister Oleg Penkovsky (Merab Ninidze), whom Khrushchev’s warlike nature frightens. They recruit salesman Greville Wynne (Benedict Cumberbatch). Wynne is at first understandably reluctant; but, learning that he may be able to prevent a catastrophic nuclear exchange, he agrees to act as a courier of Russian military secrets to the West in an effort to defuse the missile crisis.

Naturally, Wynne’s wife, Sheila (Jessie Buckley), cannot know what Wynne is doing under cover of his business relationships. So Wynne’s changing behaviour leads Sheila to draw her own conclusions. More seriously, the Soviets, alerted by an MI6 mole to a probable mole in their own ranks, look harder at Wynne and Penkovsky, placing them both in mortal danger. Though MI6 has promised British asylum to Penkovsky and his wife (played by Mariya Miranova) and daughter, the Soviet noose is tightening.

The story of how Penkovsky and Wynne achieve what they do remains closely tied to Penkovsky’s strengthening convictions and Wynne’s steadily growing courage, and Wynne’s development in particular demands attention and empathy. Benedict Cumberbatch’s Wynne departs so radically from his best-known characters that we can easily forget the actor behind the mask; we see instead a man who knows how to woo his clients and make mutually profitable deals and doesn’t feel cut out for heroism.

Shot and edited to perfection, The Courier poignantly reminds us of the ways and hazards of spycraft on the streets of 1960s London and Moscow — and helps us recall the courage that it demanded.