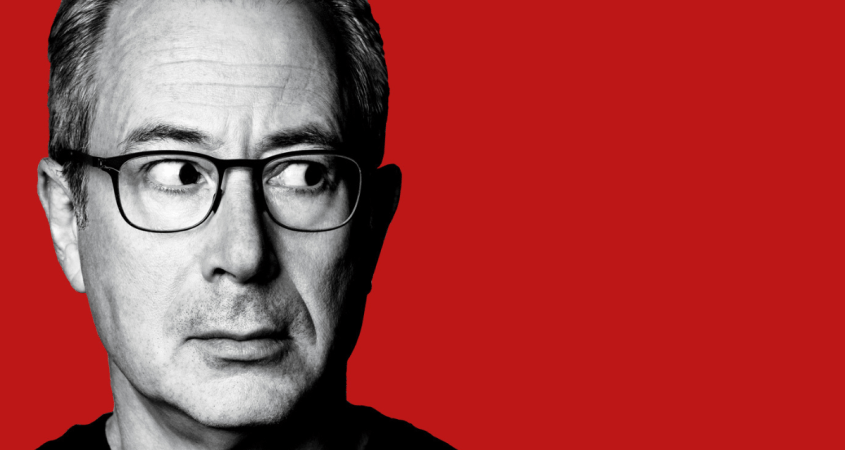 Ben Elton is the Cliff Richard of comedy. At least when talking about long term success. The man has seen a hit sitcom on the BBC every decade since the 1980s, from punk comedy favourite The Young Ones which Elton co-wrote when only in his 20s, through to the beloved Blackadder and all the way up to the current David Mitchell sporting Upstart Crow.

He’s worked with comedic greats like Adrian Edmondson, Rowan Atkinson, and the dearly departed Rik Mayall to name but a mere few. He’s worked with music greats such as Queen on the We Will Rock You musical. And he’s worked with the great publishing houses with myriad novels including Stark, Popcorn and Dead Famous.

And now, at long, long last (especially considering this was meant to happen last year thankyouverymuchCovid) the man is returning to the stand-up stage for the first time in 15 years. Ahhhh, the call of stand-up. Just when I thought I was out, they pull me back in, eh Ben?

“I never wished to, nor tried to, escape stand-up comedy,” Elton chuckles. “I just took a pause, only because I wanted to be a part of my kids’ growing up and, if you tour as I do, you take a few months, go to Australia and New Zealand, maybe a bit of Canada, drop into Hong Kong… It takes a lot of time! And I don’t have to do it, so I don’t want to miss six months where my kids go from five to six or six to seven; those are beautiful times, although they’re hard work, to be honest. But I’ve had my time taking the piss out of that.”

One of the reasons Elton has never wished to escape stand-up lies in its many allures, which have been with him since a young age.

“I loved stand-up comedy as a 21-year-old when I realised it was a vibrant vehicle for ideas,” he chimes. “For me, stand-up comedy is an intriguing and challenging comic art. It’s the most subjective thing I do. When I’m on stage, I’m really presenting my SELF. Elsewhere, I can hide my opinions behind characters, or any number of things!

“But on stage, it truly is the sharp end, and on the sharp end is me; this is how I feel, this is what makes me passionate, this is what makes me angry. This is me seeing the funny side of this shit we’re all going through. And that’s a very personal and edgy thing to do. If you slip, you’re doing it in front of a lot of people; if you’re misunderstood, especially in the age of Twitter and outrage, it can have some very serious consequences. But it all makes for a very focused evening, and makes for more exciting art.”

The comment about Twitter and The Age of Outrage lent me to query whether this has changed Elton’s approach to comedy, either through context or content.

“I talk a lot about it,” he says. “It hasn’t changed me; I do my thing, I tell my truth, and I tell it with as much passion and vigour and creativity as I can.

“But I do talk about context, and not quoting me out of context,” he continues. “And it’s funny – I hope I’m making it funny – but I talk about what could be done to me, and I’ll pick up a sentence from a nuanced conversation about trans rights or Me-Too, and you take that one sentence and I’m dead; you’ve killed me. So I’m saying don’t do it. And if anyone does do it, I need everyone else to tweet back in my defense! My wife was worried about it because she said you’ll be labelled toxic, and closed down; become a non-person.

“Frankly, I’m 60, I’ve written a lot of novels and done a lot of tours; I think I can take the risk.

“The audience knows what’s happening underneath and are enjoying it,” he continues. “The banality of taking offense without thinking, without applying nuance or context, is a very dangerous thing that’s happening at the moment. Suddenly everyone’s having toxic debates and it’s alienating us all. It’s making us feel all separate and defensive. But my tour is bringing everyone together! You can see what I’ve done to Britain. When I started, Britain was hopelessly divided; but look at us now!”

Fellow Brit comic Jimmy Carr, who I have interviewed on a few occasions, also shares this sensibility. Elton is quick to highlight the differences between he and Carr’s approaches.

“Jimmy has a very different situation; what he’s saying is look, it’s all out there and I’m finding the funny, I don’t care if you take offense or, at least, I wish you wouldn’t. I’m a bit different. I like Jimmy; a lot of what he does is very, very funny. But his whole point is, ‘I don’t have a position’. I don’t have an attitude here; I’m just telling jokes.

“I don’t do that,” Elton asserts. “I don’t tell ‘jokes’. I’m saying the exact opposite of what Jimmy’s says. This IS me, I do have an attitude, I do have a position. I am applying my point of view and adding a moral imperative to the act. You don’t have to agree with it, but by fuck am I going to make it funny and I’m gonna make you understand it, and if you quote it out of context I’ll pursue you til the day I die.

“Jimmy’s a gag-teller; I am giving my truth. I’m coming at various issues with my point of view, and that’s kinda dangerous. You can’t say what Jimmy says, which is, ‘Hey! I was just having a laugh’. Mine are laughs within the idea I’m developing.”

With this – and without risking the banal ‘do you still get nervous?’ question performers receive ad nauseum – Elton goes on to say:

“I don’t get gut butterflies; it’s more a tension I get before going onstage because I have to remake my comic argument every time. Over two hours, I have to make my point. And I stress about that. People don’t need to agree, but I hope I intrigue. Some people say, ‘I don’t vote the way you do, but you made me laugh and you made me think.’ And I think, ‘Ooo, that’s nice.’”

Fully down the comedy rabbit hole, this leads Elton is expand further, delving into the theoretical and, perhaps, the philosophical.

“My life and my career is an instinct,” he says. “I write what I think. It’s not an option for me to just write gags. Art is an improvisation. When I write a joke, I’m hearing it for the first time. None of us know how we think. It’s like that Ian Foster quote: ‘How do I know what I think til I see what I say?’ Like painting a picture; you don’t know what it’s going to be when you first dab colour onto the canvasse. Sure, you have an idea, but you don’t know what’s formed until it’s formed.

“Mind you,” he adds, after brief reflection, “there’s an Abraham Lincoln quote: ‘If you give me two hours to cut down a tree, I’ll spend the first hour sharpening the axe’. That’s also worth thinking about! So maybe have a bit of a plan.”

It’s clear Elton pours heart and soul into his comedy, and after so many years in the game operating through so many different mediums, he has a lot to say, with his entire career to this moment leading up to his show at The Playhouse.