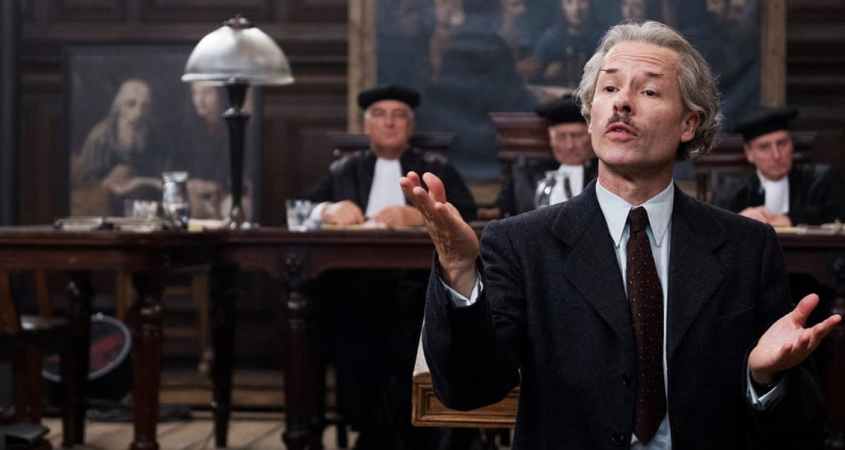 Adolph Hitler’s Third Reich comes to an end in May 1945, and so begins the aftermath, which includes hunting down those who profited by selling great (often stolen) works of art to the Nazis.

One of the men responsible for tracking down these works of art and bringing to justice those who sold them to the enemy, is Dutch Resistance fighter Joseph Piller (Claes Bang).  When Christ with the Adulteress, by the great Dutch painter Johannes Vermeer, is recovered, Piller traces its sale to Nazi Reichsmarschall Hermann Göring by Han van Meegeren (Guy Pearce), an egotistical but failed artist.

Piller takes van Meegeren into custody to begin his investigation.  But there are other forces at work — those with a blood lust who just want confessions and convictions, with little regard for any truths that might hide behind apparent evidence.

At the heart of Dan Friedkin’s directorial debut The Last Vermeer, which is based on a true story, is the relationship between Piller and van Meegeren.  Bang’s deeply believable portrayal of Piller’s complex, strong, justice-driven character, forged by both his Judaism and his experience in the Resistance, is magnetically juxtaposed to Pearce’s compelling portrayal of van Meegeren’s self-absorption, vanity, and layered intelligence.

Utterly convincing sets of the war-ravaged Netherlands, authentic costuming, and completely believable performances by all bring to life the hardships and loss that millions suffered through the evil madness of a relative few.  The story that The Last Vermeer reveals concerns not only two men apparently on opposite sides of a ledger, but the choices that every person is called on to make between right and wrong.  An absorbing work, The Last Vermeer presents a colourful forensic mystery and legal drama and a thoughtful challenge to anyone interested in life’s greys.