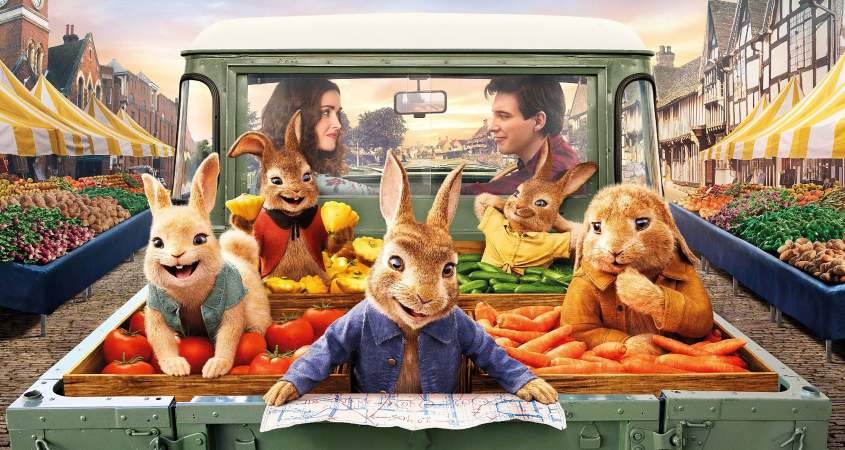 Narrated by Flopsy (Margot Robbie), Peter Rabbit 2: The Runaway opens with the wedding of Bea (Rose Byrne) and Farmer McGregor’s heir, Thomas McGregor (Domhnall Gleeson).  Though the earlier, potentially deadly conflicts between Thomas and Peter (James Corden) have been resolved, and although Peter in fact does his best to help protect Thomas’s garden, Thomas continues to perceive him as at best mischievous.

The success of Bea’s book of the rabbits’ adventures (as appear in director Will Gluck’s original Peter Rabbit film) results not only in fame for the rabbits but also in the interest of multinational book publisher Nigel Basil-Jones (David Oleyowo) in having Bea write the rabbits into unnatural settings. But Thomas becomes concerned that publication pressures are overwhelming Bea’s artistic integrity.  And when Nigel and his publishing team begin promoting Peter as a villain for future books, Peter feels so misunderstood that he quietly walks away — only to be recruited into a criminal gang of rabbits and cats for an unprecedented heist.

Peter Rabbit 2 matches the earlier Rabbit movie in the insights it offers both into Peter’s difficulties with others’ perceptions of him and into the character traits that underlie his many accidents; and it lets us understand Bea’s and Thomas’s own struggles with fame.  At the same time, the film is never less than funny throughout, and is often, especially in terms of physical comedy, hilarious, with every animal living on the property responding to new, imaginative, challenges — especially the challenges of the big city — in his or her own characteristic way, and this sequel draws out beautifully the various Rabbit family members’ unique characteristics.

With seamless blending of astonishingly lifelike animal characters into the live action throughout; a driving soundtrack suitable to the story and its audience; and jokes for everybody, Peter Rabbit 2: The Runaway will make anybody aged four or more laugh at its many unfortunate moments; it is uncompromisingly hilarious.  See it in time to catch it more than once.