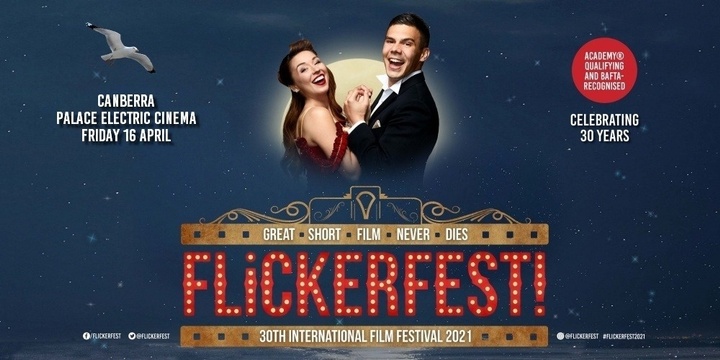 Flickerfest, Australia’s largest Short Film Festival, is excited to be returning with its National Tour to the Palace Electric Cinema in Canberra showcasing the Best of Australian Shorts programme.

The programme presents a selection of entertaining, inspiring and award-winning films from the festival’s globally respected competitions, giving local Canberra audiences the first look at the hottest shorts in the world today.

Highlights from the Best of Australian Shorts include the fabulous Roborovski, which won the Yoram Gross Award For Best Australian Animation at Flickerfest 2021 by actors Tilda Cobham-Hervey and Dev Patel who step behind the camera to direct this animated short about an adorable miniature hamster seeking revenge, penned by Oscar nominated writer John Collee (Happy Feet).

There are also incredible shorts from Canberra born and raised filmmakers including An Athlete Wrestling A Python, where life imitates art, from Stephanie Jane Day and the award winning Idol from Alex Wu, exploring the inner workings of the idol entertainment industry in China.

And of particular note is super fun and timely The End, The Beginning, shot around Canberra and utilising a hearty local crew, which was awarded Best Original Music score at Flickerfest 2021. Meet the filmmakers before the screening and enjoy a Gage Roads beer, Rosnay organic wine or PS organic juice and popcorn on arrival.