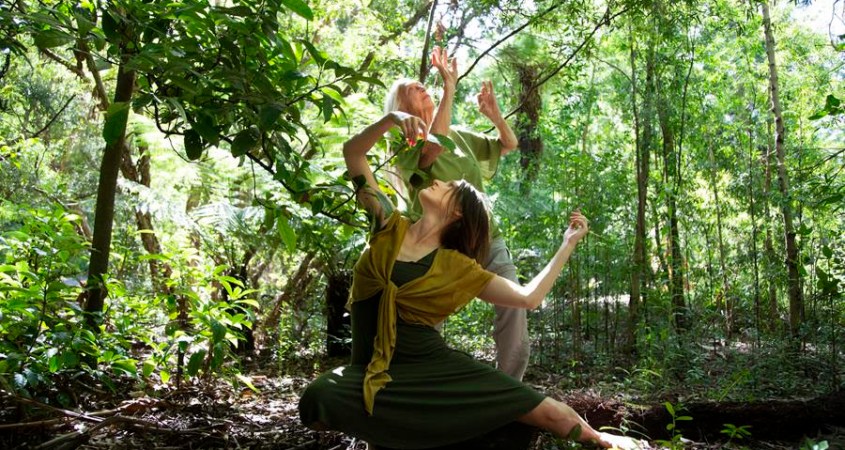 Run as part of this year’s Enlighten Festival, Symbiosis is an environmentally themed performance run by a collective of Canberran artists, under the leadership of the locally based Australian Dance Party.

Set in the lush Australian National Botanic Gardens, the artwork employed music, dance and spoken word to explore the close interaction between different organisms. It delved into such relationships as commensalism (one benefits without hurting the other), mutualism (both benefit) and parasitism (one benefits at the other’s expense). Underlying it all, was the theme of humans’ adverse effects on the natural world.

The air was thick with enough insect repellant to kill an elephant (or at least a possum) when we arrived. We were given individual lanterns, so we would not disappear into the darkness of the bush, never to be seen again.

Dancer and choreographer Liz Lea (AKA Ishia Botanist) dressed in her Tim the Yowie Man outfit, led us into the rainforest gulley, which was transformed with coloured lighting. The gardens assume a magical quality at night, with the sensation of nocturnal life just beyond the light’s gleam. Lea gave an informative and funny commentary in a dramatic style, with lots of ad libs. Fancy scientific names for plants gave extra scope for a theatrical delivery.

There were several individual performances as we were led along the gardens’ many tracks. A group of dancers moved together in the gully, simulating the relationships of mutualism, as the sprinkler system delivered a fine mist and kookaburras added their own comments.

Symbiosis succeeds in sending a beautifully staged yet strongly stated message on the need for urgent action on climate change, as well as a radical rethink of how we interact with the natural world on which our life depends.