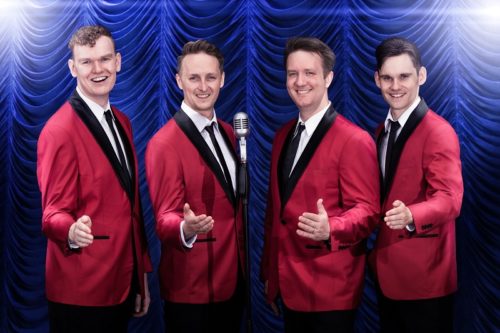 Frankie Valli & The Four Seasons had a string of huge pop hits from the ’60s to the mid ‘70s. The story about four guys from New Jersey who made up the original band was captured in the 2005 musical Jersey Boys (and the 2014 film of the same name, directed by Clint Eastwood). The local production of the musical, postponed from its planned 2020 dates, was a worthy choice for Canberra Philharmonic Society (Canberra Philo) to present as its first big production post COVID lockdown.

The musical, a drama liberally splashed with the band’s great songs, tells the story of the band’s formation and musical development and the various trials (both business related and personal) which bedeviled its progress. Critical to the band’s success was the involvement of member and song writer Bob Gaudio. However, it was the incredible strength and range of Frankie Valli’s stratospheric falsetto which gave the group its signature sound.

The vocal skills of the lead cast members were outstanding, particularly Jared Newall as Frankie Valli. Also shining was Jonathon Rush, who well played the character of Bob Gaudio, a bright all-American boy-next-door set against the darker, moodier characters of the other three original band members.

There were so many hits in the first half of the show – including Walk Like a Man, Sherry, My Eyes Adored You and Big Girls Don’t Cry – that you wonder what can possibly be left for the rest of the show.

At the interval it was a race to hit the loo, get in the bar line and demolish a glass of red before act two (as you cannot take drinks into the theatre). Back in the theatre, the hits kept on coming, such as Who Loves You (from later in the band’s career).

With great lighting, bright and shiny satin-look outfits, sequinned jackets, and colourful comic book-styled slides as backdrops, it was an impressive, flash production. Support staff did a great job, being very busy with the constantly shifting props, and the supporting orchestra rendered the pop hits faithfully to their original sound.

Jersey Boys has maintained the very high standards which musical lovers have come to expect from Canberra Philo.