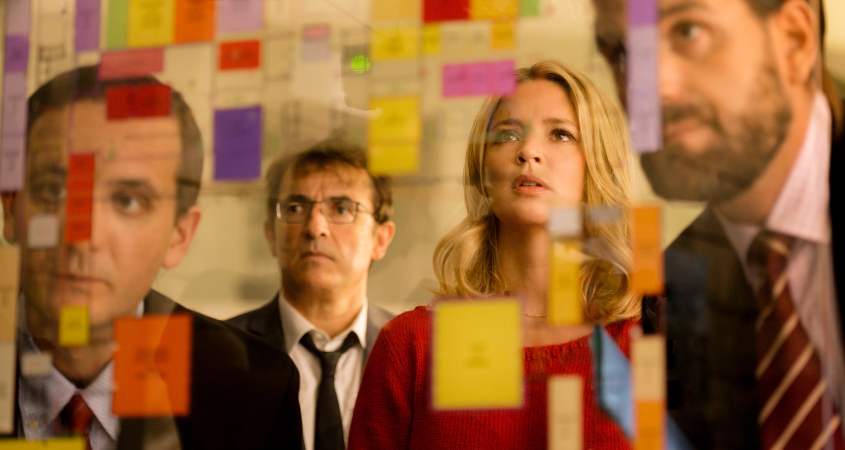 Suze Trappet (Virginie Efira)’s years-long quest to find the son whom she surrendered at birth has acquired fresh urgency with the news that she will die young. But individual circumstance has no effect on the city civil service’s ability to locate its public records.

At the same time, the same kind of institutional thinking delivers to Jean-Baptiste Cuchas (Albert Dupontel, who also directed), who lives for his work as the city’s I.T. security expert par excellence, the news that he is to be shuffled aside in favour of youngsters who will need him to train them to know how to do anything.

When Jean-Baptiste’s disastrous attempt to exit with dignity brings the two together, Suze seizes upon his help in exchange for hers, bringing them to the film’s third co-protagonist, a blind man with a great memory and superb hearing in charge of retrieving public records, Serge Blin (Nicolas Marié), who is up for any adventure and falls hard for Suze. Now between the three of them and their collective goal of restoring Suze to her son lies only the might of the entire city.

Telling examples appear throughout of the blindness that routinism induces to immediate reality; in the multifarious ways in which habitual uncritical thought can prevent constructive action, the film — as so many French films do — provides an education. And it does so with genuine feeling. But it does so much more. Bye Bye Morons takes on modern-day intellectual parochialism through an adventure that will have you in stitches as it pits imaginative up-to-date heroics against the inevitability of accidents, death, and the civil service. If its ending fails to match the creativity of the rest of it, still Bye Bye Morons stands testament to the power of imagination and boldness to free the willing from the illusion of inevitability that traps so many in the banality of policies and procedures.