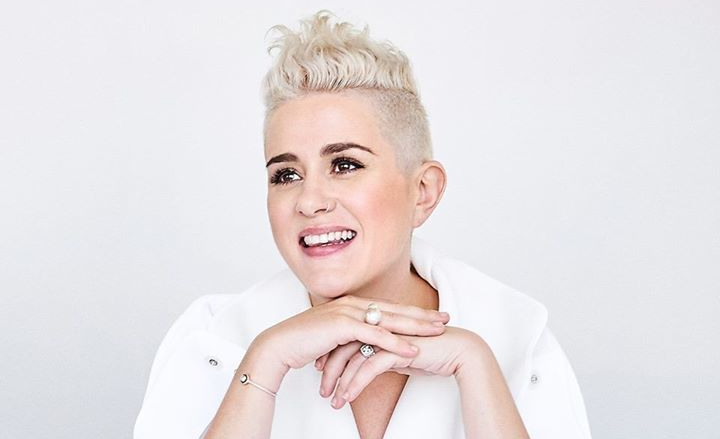 Katie Noonan’s career has been an incredible journey to watch. From co-lead singer of the band george with her brother Tyrone, to building and sustaining a hugely successful and diverse solo career, Noonan is a real stand-out and leader in the Australian music industry.

Those who know me well know how much of a fan I am of Katie Noonan; her voice and her music career. The privilege and opportunity to write this article about the key person who inspired me back in my teenage years, and about an album that inspired my own music career, really feels like a surreal, full-circle, pinch-yourself moment.

When Polyserena hit the airwaves back in 2002, Noonan and the rest of the members of george were unaware that their lives were about to change. Even though they’d been touring as a band continually in the years leading up to the debut album release, Polyserena suddenly put them under the national spotlight. They were the “5-year overnight success” story.

Noonan will be sharing more about the making of Polyserena at a special in-conversation style event at the National Film and Sound Archive on 6 March. She’ll be joined by Tyrone, who has also gone on to be a remarkable influence in Australian music in his own right.

I asked Noonan if the band had any inclination of how successful they thought the album might be.

“We had no idea…you know…number one records were by people who [were] played on commercial radio in Australia then, and we really weren’t. So it was really [thanks to] a very loyal fan base who had been coming to our gigs.”

Noonan went on to talk about what it was like making the eventual double platinum selling album.

“We were just doing our thing, and making that record was a very beautiful experience. Just five hippies hanging out at the Grove Studio [just outside Gosford].

“We simply felt so lucky to be able to be full-time musicians in a studio for two weeks to make a record! That was an incredible privilege and we could just, kind of, lose ourselves in the world of music making for a couple of weeks. Yeah. And then we emerged and it was done.”

Though the band went on to release another album, Unity, they decided to disperse at the end of 2004 to follow their own independent projects and careers.

Since george, Noonan has gone on to continue to forge an incredibly diverse, successful and inspiring career. She’s recorded and played with the best of the best, in Australia, and around the globe. An advocate for collaboration and supporting fellow artists, Noonan has made albums with Paul Grobowsky, Karin Schaupp, The Brodsky Quartet, The Queensland Chamber Orchestra and the Australian String Quartet.

She’s made three albums with her jazz trio, Elixir, which features her husband, Zac Hurren. She’s also released five solo projects over the years, comprising both original songs and covers of her favourite musical influences. These albums include Skin [2007], Songbook [2013], Songs That Made Me [2014], Late Night Tunes with Noons [2020], and most recently, The Sweetest Taboo [2020].

Noonan will be performing a selection of her favourites from over the years in just a few weeks (7 March at The Street Theatre]. She likes to connect with the audiences who have supported her and keeps her solo shows, “super, super relaxed”. While there’s a setlist, she’s open to taking requests of songs from throughout her career.

“Some requests are really random, which is awesome; I try to figure them out on the fly,” she says. “But then people obviously connect with george songs like Breathe In Now and Special Ones.”

Hopefully, you’re able to get along to at least one of these events over what I’m dubbing “Katie Noonan weekend”. However, it’s likely you’ve heard the recent and happy news that Noonan has just been announced as the new Artistic Director of The National Folk Festival. So, you may just see this musical powerhouse around our lovely city a little bit more over the next year or two.

The keen collaborator that Noonan is, she’s keen to bring more local artists, makers and organisations in the creative industries on the journey – particularly after what’s been such a difficult year for the arts in Australia.

Be sure to grab yourself a ticket to one or both of the events Katie has coming up (see details below) and get to know this world-class, and soon-to-be, honorary Canberra artist.