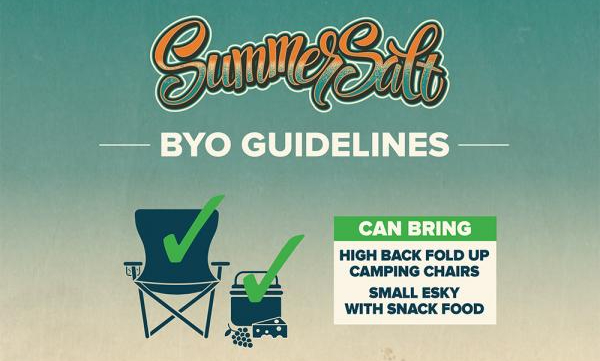 In an unusual – or perhaps, given the times, usual – COVID related requirement, we all trouped into Commonwealth Park carrying individual folding chairs for the sold-out SummerSalt Festival.

Canberra’s own Lucy Sugerman opened the show. She sent the soft notes of her LANKS collaboration I’d Do It All Again floating lazily over the heads of the crowd, who were eager to reacquaint themselves with live music. Her songs revolved around relationships, including the perky i wanna to kiss boys cos i’m bored. The simple accompaniment of acoustic guitar and keyboard let the quality of her voice shine out. There was a great cover of Crowded House’s Better Be Home Soon before Sugerman closed with her new single colour blind.

Montaigne shifted the show into a completely different universe with operatic, electronic jungle rhythms and complex songs delivered with her trademark angular vocal style. She bounced onto the stage with the syncopated beats of Change, dancing and prancing around the stage barefoot. Montaigne pushed out the big notes in The Dying Song, showcasing an impressive vocal range that can shoot up and down like the price of Bitcoin. Her theatrical style saw her gesturing and rolling around on the stage floor, singing I’m a Fantastic Wreck.

Rippling electronica announced the arrival of Boy & Bear. They brought smooth rhythms and warm vocals to sooth the soul. The band presented more sombre songs and serious themes, such as wanting to present a good role model to their kids in Old Town Blues, but delivered with danceable beats which some punters could not resist. Songs such as Off My Head from their last LP Suck on Light showed that their style has remained consistent over the years. New stuff was accompanied by old favourites, including an elegant, slowed-down version of Lordy May and their big hit in a cover of Crowded House’s Fall at Your Feet.

John Butler (appearing sans trio) reminded us of the privilege of being here, handed down from our ancestors. Themes took us on a tour through faith, life and death and, of course, politics. Performing solo really showcased his excellence as a musician, as he moved from instrument to instrument. He dazzled from opener Gonna Be a Long Time, dropping lyrics in his signature clipped style. A set highlight saw him picking on a banjo for Better Than before moving onto Used to Get High. Tunes from this master songsmith were alternately haunting and incredibly catchy. The crowd was awed by an incredibly intricate instrumental from Butler’s busking days, that revealed what a maestro he is.

The Teskey Brothers changed the pace to slow, deep blues with their opener Let Me Let You Down. Sam Teskey could really make his guitar weep and wail in Say You’ll Do, making emotion flow in this moody music. Brother Josh’s great vocals could switch from gravelly to silky smooth. The band gave us complex songs in which the jigsaw parts of guitar, Hammond organ, brass, and bass fit so well together, sometimes with the added technique of injecting heavy pauses in songs, leaving everything hanging. The keys led the way in on a cover of INXS’s Never Tear Us Apart. Paint My Heart was orchestrated, with distinct movements in which various instruments featured. The band brought the music for Right for Me down low, so as not to disturb the bats sleeping round the park’s treelined perimeter.

The night closed fittingly with a huge dance party, courtesy of the wild music of The Cat Empire. You cannot go wrong with plenty of brass and bongos filing the air with Latin rhythms, under the rising full moon. The band led off with Kila, getting the crowd upstanding, with arms raised in the stage lights. Concert organisers had to repeatedly remind punters that COVID restrictions meant the they had to dance immediately in front of their chairs. It was a tall order, with such seductive music tempting people to move up front. Set highlights included Wolves and longtime favourite Sly.

SummerSalt was a very well curated festival, with artists who, although very different in style, fitted in beautifully with the overall vibe of the occasion.