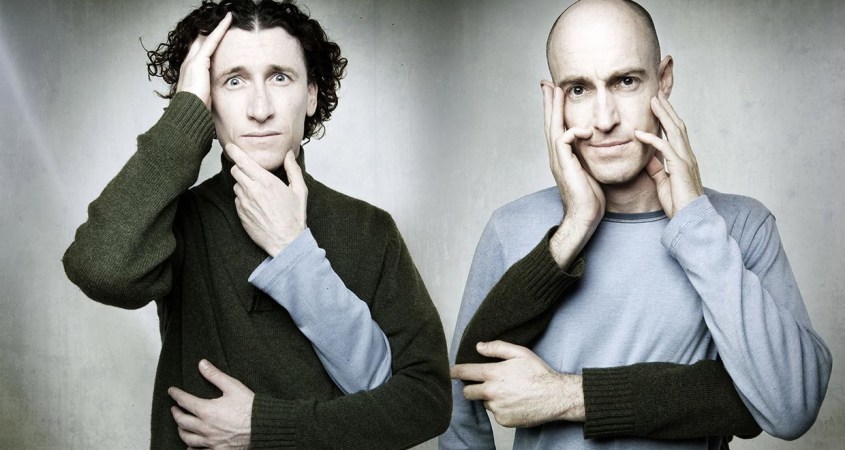 Kitty Flanagan did it in Canberra! Now The Umbilical Brothers are doing it, that is running a comedy workshop to road test their new material before taking it out on the road as part of a big show.

The Canberra Theatre Centre’s Courtyard Studio was – as it has been for the Kitty Flanagans and Wil Andersons of before – perfect for the purpose, allowing the comedians to get up close to a boutique audience and ply their new wares.

The Brothers (Shane Dundas and David Collins) have been serving up their hyperactive brand of physical, noisy comedy since 1988. Their new show Green was well named, reflecting a big move into digital technology, including green screens, studio cameras, and recorded digital effects.

Entering the venue brought to mind visions of how a Play School set would look after a cyclone. There were baby dolls, wooden blocks and bear hand puppets strewn all over the place. The new approach includes a lot of props, but the Brothers did not have as many on hand as they had intended, after being robbed at a venue in Newcastle.

They were also impeded by the fact that technology is the weakest link.

Their laptop, on which so much depended, ‘died’ a couple of hours before curtain up time. Dundas and Collins (and their IT support) had to do a lot of improvising so the show could go on. Some of the gags just could not be done due to technical glitches.

However, the show was still hilarious, just in a different way, due to the extremely random approach the guys had to take; a workshop in the truest sense. Their new digital approach takes their physical comedy to new levels. A highlight, without giving it all away, was Baby Sports. This deliciously un-PC segment will either make you cringe or fall off your seat laughing. I was in the latter camp. One of the hardest things about the show was deciding whether to watch the guys in front of the green screen, or watch the main screen where they, plus the special effects, all come together. Trying to see everything at once is a challenge, but certainly ensures there’s never a dull moment.