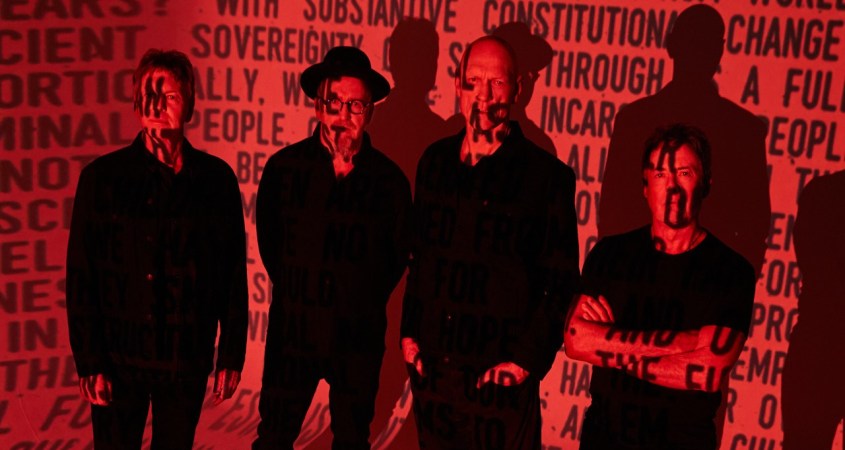 Trust is a powerful thing. Knowing Peter Garrett was a busy bloke and that only we had a short time to talk together, I had to trust that he was able to respect my personal experiences of attitudes toward Indigenous people.

The risk taken, the trust came through, and we were able talk freely and confidently about The Makaratta Project, Midnight Oil’s strong links with First Nations issues, their hopes for the impact of the album, and the larger Makaratta Project and future.

We then talked of the structure and shape of Midnight Oil’s newest work, and how it traverses the physical, emotional and political landscape of Australian’s relationships with its First Nations People.

Moving across this landscape, we talked about the album and the ongoing touring project, its stories, its personal, artistic and cultural impact and hopes for the future.

When I referred to the opening two tracks First Nation and Gadigal Land as evocative of, and even directly referencing, the anthemic titles of the ‘80s, Peter quippied:

“Well, we are the Oils and we do like to be loud!”

More seriously, Peter acknowledged this connection, which he returned to across the conversation, often referring to Diesel and Dust as if it was a fulcrum point. Peter made it clear that he and the band, despite the twists and turns since he embarked on a musical career as a student at the ANU in the ‘70s, has never lost sight of Indigenous rights issues.

“Even before Diesel and Dust, even as far back as Head Injuries and Place Without A Postcard, part of our yearning has been to better understand and connect, recognise, acknowledge, and ground ourselves in the real history of our country, which you can’t ultimately ignore. You know invasion Australia or Settler Australia might always try to just shrug it off and look at a big city full of skyscrapers and say, ‘Ah well, it was a long time ago’.

First Nation, its music plugged into The Dead Heart from the Diesel and Dust album, opens up the issues for Indigenous people today. Its driving plea “…still waiting…when?” reminding us that these injustices/issues remain to be resolved and that Midnight Oil’s commitment to give these voice hasn’t gone away.

“There’s reason that First Nation culture and community is the longest existing culture,” Peter emphasised. “Its strength and resilience and depth is a powerful, powerful thing. It hasn’t gone away. It may have suffered an incredibly difficult time, but there’s plenty of evidence on the sporting fields, in the schools.

“I hear it in music. I see in the poetry and in the vision and determination of the people who came together at Uluru to draft the Statement From The Heart.”

Gadigal Land is another song pivoting on that ‘80s Midnight Oil sound, which backhandedly celebrates all the ‘gifts’ that Europeans brought; disease, poison and dispossession. Its tongue-in-cheek joy reflects the openness to the conversation, which Indigenous people seem to maintain, even though as Peter said:

“…all of the impacts of people having their land stolen and their family torn apart are still felt every day, every day.

“It’s the right song to have up front because it is so clear, and with the additional voices coming in to contextualise what is being said, you end up with something that is thought provoking. There’s no hiding in the corners when you hear a song like that.”

Noting that the third song, Change The Date, for me was a bridge to a different, more collaborative, feel in the album, I asked Peter if he felt that changing the date of Australia Day was already too politicised and had lost some of its gravitas.

“I reckon we need such strong symbolic action backed up by real concrete steps, legislation and resources,” Peter responded. “It is not a gift that Anglo culture bestows on First Nations, it’s an acknowledgement and a stepping to one side to allow that strength of First Nation culture to come through.”

Contextualising my reaction to Terror Australia’s 180 degree spin by explaining that the name of a common brand of cheese was a term often heard in relation to Aboriginal people within my extended family. I explained how the song hit me between the eyes and that I saw that it’s not just the powers that be, the rich blokes, the ‘money and ignorance’ of the corporates. It’s us who hold this fear which was expressed through this casual, almost traditional racism in language and attitude.

Agreeing to the almost antithetical proposition: the First Nations people, who’ve been here for thousands of years, are quite comfortable in their land and that it is us who are the uneasy ones, Peter went on:

“The failure of the political process to essentially make good a wrong means that its left to citizens, wherever they are and whatever their station, to pick it up and to carry it forward and to demand of political leaders that they respond.

“It’s challenging for a culture to front up to that. I think we can do so but we really have to be prepared to lose some of our own apprehensions and assumptions; to think very hard about what happened.”

In a somewhat emotional telling of the creation of Terror Australia, Peter recounted that it came about in the mid ‘80s when the band was travelling the western desert and Arnhem Land with the Warumpi band, recording Diesel and Dust.

“It was one those songs. I started off with some words and at the time our dear departed brother in music, Bonesy Hillman, was still around. It was one the few co-writes that we ever did.

“So when we tipped all of the songs out on to the table, it was one of the ones that fell out.

“But I think the truth of it is that Terror Australia couldn’t have had the force, I agree it really does on Makarrata, if it weren’t for the fact that it was sung by an indigenous performer. Alice Skye really found the right place to sing it and communicate that sentiment, which needs to be heard. It has more force and presence as a result.”

Speaking of the later songs, Peter emphasised the strength in the collaboration of Desert Man, Desert Woman and Wind In My Head, as well as the album as a whole.

“It’s what you’d call a multi-colab,” he says. “It was incredible to have access to previously unreleased material from Gurrumul. Incredible to have Sammy Butcher, who we knew from Warumpi days, to fly things in for us and be at the back end of Wind In My Head.

“Kev Carmody, one of Australia’s great poets, and Jess Mauboy and Neil Murray from Warumpi, too. It’s a very rich field of talent that came and worked on this record with us.”

Raising the final song, Come on Down, which comes after the heartfelt reading of the Statement From The Heart and calls people to ‘…come on down to the stomping ground, to come the fire’, I asked Peter if he really thought that a big enough fire can be made to attract enough people to come on down and unite around Makarrata?

“There are points of light amid lots of clouds and storms and darkness,” he responded. “The station walk offs, the referendum, Vincent Lingiari and the Gurindji, the Bridge march, Kevin Rudd’s apology.

“We’ve also got the original response from some Europeans who didn’t accept that fact that the country should be stolen, the resistance by First Nations people which we are only now starting to find out about thanks to oral and written accounts of the times.

“You’ve got reason to be sceptical,” Peter continued. “…we’ve been so let down, particularly by the national parliament. Since the Rudd apology some time ago, it has been a weedy field of dried out corpses and we need to bring it to life again.

“And more people can come by voting, writing letters, protesting… any small thing. The fire will grow.”

Shifting the focus to Midnight Oil as a band, and referencing Taylor Swift’s efforts to regain control of her music, I asked about their curative approach to managing not just the music but the band, as well as what the band stands for across so many years and how this empowers their success and longevity.

“You’ve nailed something there; people who’ve looked at the band over the years would see it’s a big part of what we do,” he responded. “We really want to sketch out the ground on which we are creating and playing. We’re not too interested in anything other than ourselves finding that common place as 4-5 musicians; that’s where we need to be first.

“We create something that isn’t necessarily hostile to commerce but certainly is not at all interested in commerce determining what we should do with our art.

“Our art, our performance and our political views have to come first and they’re have to come in a way that makes sense to us, without any interference or watering down or compromise as a vision which we try to play out when we play on stage.

“I think the whole purpose of this is to not only have people who can, and do have connections to the band, to say that here’s some music that can move us around, but also to share that music with others and to invite people who are not necessarily Midnight Oil fans just to come and try.”

Having generously extended the interview, and with the band warming up in background for another rehearsal, Peter continued speaking of the Makarrata Project album and our conversation.

“It is interesting to hear how you are responding to Makaratta,” he says. “The fact of it is that this is the album we had to make. When the songs tumbled out it was key to involve Aboriginal and Torres Strait Islander performers and singers. That’s what walking together, what the Uluru Statement From The Heart, is all about and that’s what our future looks like if we are to have a decent future at all.

“Midnight Oil certainly tries to make a sense of how individuals are relating to songs, how they feel about things. As a band, it’s about what we want to say, and finding a way to communicate that which stems from the music and the primal sort of heart-driven emotion; adding a layer of history and fact to the lyric. We’re not churning out fast food, we’re trying to make something that sticks to your ribs a bit more.

“We’re incredibly proud of this record with its collaborations. We feel the opportunity to tour it live and have other guests with us has the making of something very, very special.

“We’ve obviously played in lots of places; big world tours and all that. But I think in some ways this will be the most important bit of touring we do.

“It gives the opportunity not only to present the songs but to share the experience, and in that sharing we will find that people will walk away both humming and thinking…”

My trust repaid with a rewarding interview, it is hoped that all Australians can trust in each other and with courage trust the issues raised, and solutions suggested by, Midnight Oil’s The Makaratta Project.