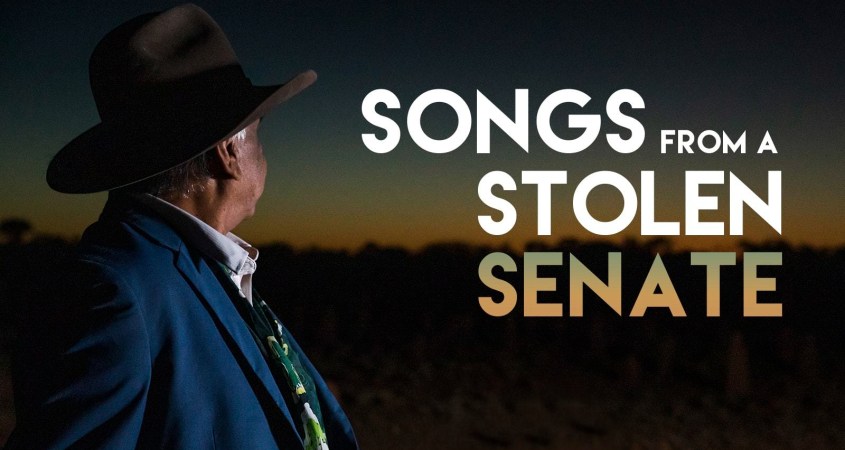 These are the thoughts of Chris Sainsbury – Dharug composer, and lecturer in Composition at the Australian National University – about his involvement in Songs From A Stolen Senate. More on this worthy topic later, but first some background.

Initially birthed as part of the Where You Are Festival, Songs From A Stolen Senate is an Australia-wide, cross cultural collaborative musical project that makes us think about where we are, our history, and the great shames and hope-filled triumphs they hold.

“It’s a collaborative project between The Griffyn Ensemble and six of Australia’s leading First Nation musicians,” says Griffyn head and composer Michael Sollis, who is overseeing the project.

“They’ve written these pieces for us to perform, taking words that have been spoken in parliament that have some personal meaning and significance. It’s about hearing the diversity of First Nation voices by putting their reflections on Australian Parliamentary history into song.”

Their subsequent dig through the parliamentary archives, with the aid of poet and research assistant Melinda Smith – revealed inspiration equal parts fascinating, disturbing, and deeply personal.

“Each composer has done a very different thing,” Sollis says. “Some of them have been quite political; we’re talking quotes that were spoken only a bit more that 100 years ago about chaining Aborigines around their neck so that they can’t escape when they’re walking hundreds of kilometres to missions.”

Another shocking and saddening event has been deaths in custody, a topic that had touched Yuin composer Brenda Gifford personally.

“I really wanted to write a musical response to deaths in custody,” said Gifford in an interview leading up to the event. “When we were younger we had that issue. Twenty years down the road, it’s a toss of the coin regarding what has changed. We’re still talking about black lives and deaths in custody now. This issue affects Aboriginal families, especially our youth.

“[This composition] was a way to respond to this issue and have power – to protest, and voice our stories. It’s so important to voice our stories through the medium of music, combined with these words spoken in parliament.”

This individuality of response, and the freedom of expression, was very important to Sollis and co when assembling the project, to the extent that they were happy to bend the rules on the project’s origins.

“The original brief was to use text that was spoken in parliament, but even that went off track a little bit,” Sollis reveals. “It depended on which issues were significant to the composers.

“For example, Norah Bagiri wanted to write about the sea levels rising in the Torres Straight, because that’s where she’s from, and very little had been talked about that in parliament. She worked with Melinda Smith to gather the words, which ended up being spoken in the UN.

“Equally, Gina Williams was interested in AO Neville, who was a notorious figure in Western Australia politics, so they used some text from a WA sitting. So it was all really driven by the composers, which is why there are five different pieces that all have different angles.”

Indeed, Perth-based Noongar singer Gina Williams had a refined focus when approaching her piece, zeroing in on the essence of language to explore identity.

“I was really interested in any references to the words ‘stolen’ or ‘freedom’, as well as AO Neville who was the chief protector of Aborigines here in Western Australia, whose policies had widespread devastation and destruction across the country,” Williams says.

“As far as I’m aware, there is no word for ‘stolen’ and ‘freedom’ in our language [Noongar] … I thought that would be an interesting thing because these are recurring words when people are talking about Aboriginal people.

“So that became the basis of the song. It was quite painful to read some of the transcripts – but taking difficult subjects and words and making them beautiful is a way we can look at it differently.

“Maybe we’re not that far from where we once were, and we still need to learn those lessons – maybe these songs are ways to do that.”

As well as this tragedy and pain, there also emerges stories of triumph and hope. For this, we return to Dharug composer Chris Sainsbury and his piece Red Kangaroo Standing.

“I worked with lyricist Melinda Smith, who adapted a maiden speech by Indigenous Affairs Minister Ken Wyatt, and a couple of his other speeches into lyrics, and then I set it to music,” Sainsbury explains.

“I hope people take away a sense that Aboriginal people are on the front foot with hope and determining our own Indigenous futures.

It is here than we return to where this article started.

This echoes the sentiment of Michael Sollis, who sounds both elated and exhausted by the countless hours he has put into the project. But his toil, and that of his fellow composers, will be very much worth it, as Songs From A Stolen Senate gifts the world with an exploration, and celebration, of our First Nation people and our relationship, and responsibility, to each other.

“I hope people will place these stories, and place indigenous musicians, at the forefront of Australia’s artistic expression,” he says. “It’s a project around supporting different perspectives, about thinking about the world around us in a different way.

“What we’re doing is part of an ongoing narrative, and an ongoing work that all Australians are involved in; to ensure our artistic, cultural and creative expression not only represents the diversity of this country, but also is rooted in this incredible history both good and bad that we’re all a part of; about how we came to be a nation.

“Even now, looking over the Brindabellas in my house in Flynn, there’s a renewed sense of place and the footsteps that came before me.”

Songs From A Stolen Senate has two performances on Saturday, 13 March at 2pm & 7pm. Tickets are $45 adult/$35 concession and are available from belcoarts.com.au/songs/