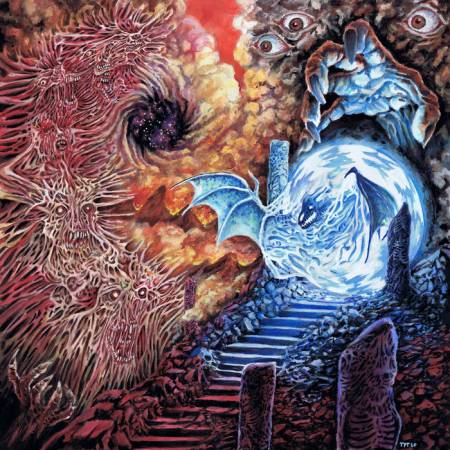 Gatecreeper belted out a really fun top ten album of the year in 2019 called Deserted. It was a simpler time then, gigs could be attended, moshes induced, and fun was had by all about the land.

And then 2020 happened and the world turned to shit. Folks with creative energies had various levels of success dealing with this new world in which most of their friends in the broader music industry had to find new ways to survive.

For bands, that meant having a bit of a think about how we create, and while some have replaced live shows with live streams, others have taken the creativity to the studio. Where 2019’s Gatecreeper hit on a fun balance of old school death metal with modern hardcore-esque delivery, 2021 Gatecreeper had a bit of a think about this EP and it’s a near perfect triumph as a result.

I could talk at length or rather, follow the music writing review tropes and dissect the EP, but what I want to talk about here is what I consider a bit of a genius approach to the structure of the EP. You have seven songs that take up 7:55 of the 18 minutes available to us on this production, and 11:05 of those minutes are essentially in a different genre in the form of one fantastic long doom song.

That is not to say that the 7 minutes and 55 seconds are not fantastic. As a good friend of mine said upon sharing this with them: “I love it, Sunlight Studios throwback straight up”, in reference to the home of the chainsaw death metal guitar home in Sweden, home of Entombed, Grave and Dismember.

That’s a pretty accurate descriptor for the start of the EP; fast, chainsaws dripping in an old death metal ethos but with a nice fresh modern production. The seven songs on offer here and I emphasise again; the cool idea of ripping out seven barely one-minute-long songs are all bangers and I applaud the band for this idea. But there’s just one thing I would add to the execution living up to the idea, for me; I just wish they were all 20 seconds or so longer to bring back one of the key riffs in each of the songs as I like a bookend to reinforce the point.

This is a minor gripe, though. Things are as they should be and it’s a bloody ripper of a 7 minute and 55 second ride. Emptiness shows that the band are not just capable of a face ripping death metal album, but also writing a near perfect doom song in the long form. Dynamic, heavy, a sense of a musical narrative across the songs bit over 11 minutes… I mean I’m a doom guy, of course I love it. It’s not traditional doom, the production is very much in the vein and complimentary to the death metal blitz that proceeds it. The drums, in particular, sound triggered and perhaps lack the analog warmth of a traditional doom metal production – but the song writing is on point and I have no complaints about what it is.

Well played Gatecreeper. This work has seen the band sign to Nuclear Blast which I hope gives them the production support to further creatively approach the mid point of Covid and beyond. Ripping EP, everyone should get on it.