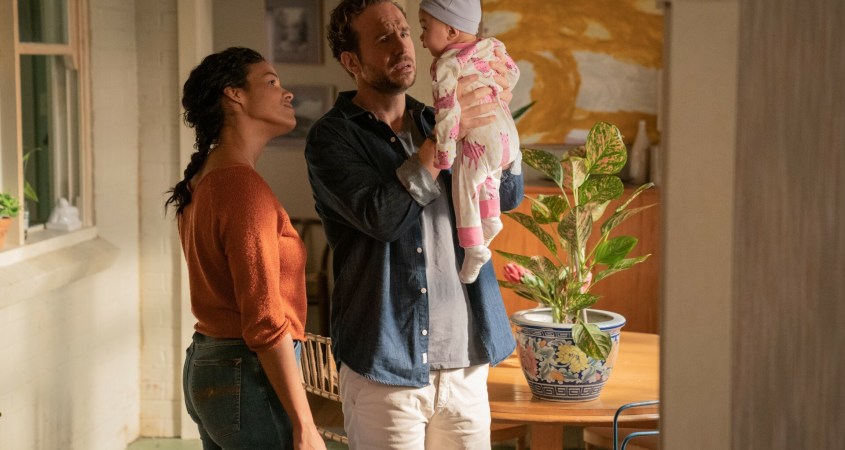 With fireworks erupting over the Sydney Harbour Bridge, serial procrastinator Teddy (Rafe Spall) rushes to kiss in the New Year with his girlfriend, Becka (Dena Kaplan), and accidentally kisses Leanne (Zahra Newman). This alters the course of all three lives. But Teddy’s own life runs on with minimal attention as he puts everything on hold except his job, which he hates. Then, from the morning after his and Leanne’s wedding, a supernatural gift by a stranger (Noni Hazelhurst) causes him to lose consciousness of all but a few minutes of every passing year. And Teddy begins to appreciate what a disaster his inattention to everything that matters most has wrought in his marriage and for his best friend, Sam (Ronny Chieng).

Some aspects of the movie seem to have no useful purpose: a stilted conversation between Teddy and psychiatrist Patrick (Josh Lawson, who wrote and directed the film), for instance, and Hazlehurst’s character’s gratuitous announcement of her sexual proclivities. But the characters by and large interact well to draw to a magically fortunate conclusion.

Essentially a romantic comedy but delivering a fable of the importance of attention to and appreciation of the present moment, Long Story Short takes an imaginative approach to the topic of taking charge of our own destinies through being present. Though its script itself might have benefitted by some additional perspective, the perspective it offers the viewer is at once thoughtful and entertaining.