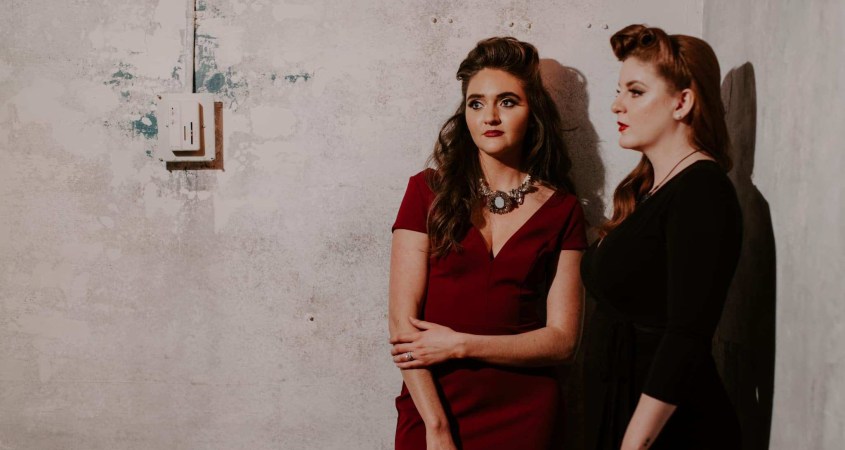 Nashville based country-pop duo Calamity Jane is releasing tracks at quite a considerable speed. They’re no doubt building on an admirable run of successes recently in an attempt to secure their position as the country crossover act to keep an eye on in 2021.

Their debut single, a reimagined version of Devil Went Down To Georgia (#64 Music Row Charts, US), received noteworthy support from the KIX and CMC national radio networks in Australia and in the US with CMT, The Country Network and The Heartland Network. The duo’s success continued with The Chase and The Mountain (currently at #38 on Music Row Charts, US), both tracks also featuring on the prestigious New Music Nashville Spotify playlist.

Calamity Jane, which features Lucy Cantley on fiddle and Camille Rae on vocals, has formulated a balanced, palatable musical style, based on a blend of country and pop with a sprinkle of folk.

Give It All Away seems to encapsulate that hybrid in what appears to be a more refined way than their previous releases. Whereas Devil Went Down To Georgia had an inbuilt sense of drama, exploring sin and temptation, Give It All Away uses a more identifiable palette, less wild but no less treacherous—a domestic drama.

Although we’re in ballad territory here, and there are formulaic tendencies present, there is also a subtle thread of tastefully rendered, tangible melancholy.

And to add to this, the lyric contains lines that disappointed, disillusioned, and damaged lovers will surely, silently appropriate; straight-shooting imagery that requires no deciphering, such as in the final verse:

I have your old t-shirt
still smells like your cologne
I put it on sometimes
when I don’t wanna feel alone.

Give It All Away is clean, clear, country-infused pop but it is pop above all else, with a vocal performance that’s as restrained as it can be when dealing with such carefully crafted melodies. The new tune will please their followers, and not coincidentally, garner another round of radio support.

As the duo says about Give It All Away: “It’s a ballad relatable to anyone who’s been through heartbreak, but also somewhat empowering in its resolution to pick up and move on.”

One thought on “Hard-working duo CALAMITY JANE deliver another clean, clear, country-infused pop hit in GIVE IT ALL AWAY”