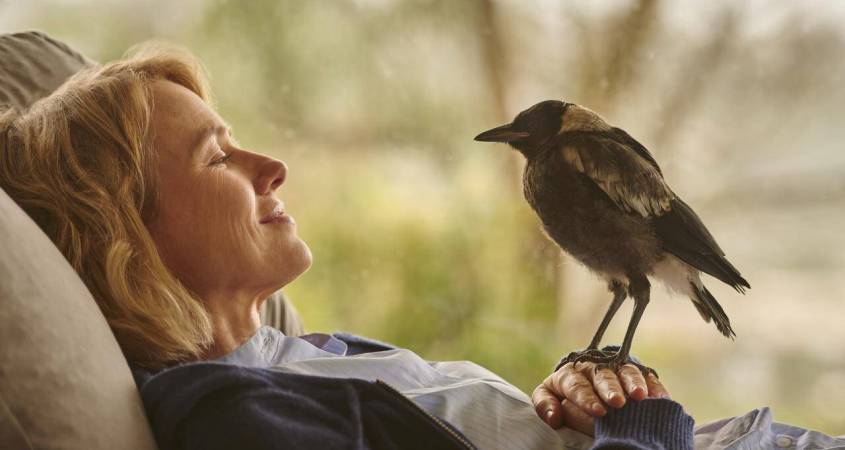 When Sam Bloom (Naomi Watts) and her husband, Cameron (Andrew Lincoln), take their three active boys on a trip to Thailand, Sam rests on a guard rail at the edge of a high roof, and the rail gives way. Till now an active surfer who has played backyard sports with her sons, Sam loses the use of and all feeling in her legs. So she feels bereft of anything to look forward to.

Supported by a talented cast, Watts plays the devastated young woman convincingly, coping as best she can with her well-intentioned, but not always completely diplomatic, friends and her mother, Jan (Jacki Weaver), overanxious for her well-being.

The last complication Sam wants is the need of her eldest, Noah, while he is at school for her to feed the baby magpie he has found. But the magpie, which Noah has named Penguin, adds more complications still when she commences short flights in the house.

This true story may be the entire family’s as much as it is Sam’s; to a great extent it’s moved along by sports trainer Gaye (Rachel House). Watts, of course, plays her part most movingly. But the character with the best ideas may be Penguin herself, whose imaginative on-screen stunts must have taken a good deal of training (using no fewer than ten magpie stunt doubles).

In a tale ultimately about humanity and appreciation, Penguin Bloom’s superb sound (including effects), on screen and off, enriches a country-beach ambience perfectly suiting the story’s pacing and setting.