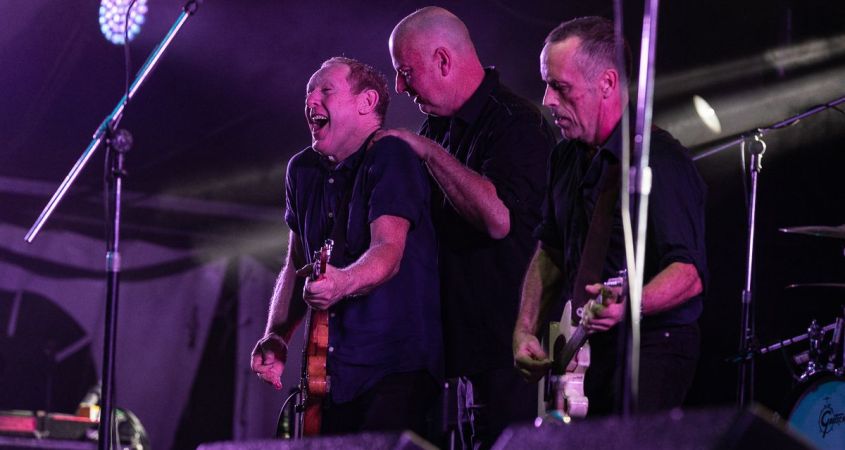 Review and pics by Paul Kerr

The Red Hot Summer Tour rocked its way into Batemans Bay on Saturday to an area, that at the end of 2019, was facing some of the most extreme destructive forces seen in the raging bushfires throughout NSW. The Bay and surrounding areas made it through, albeit with losses of property and with people’s lives changed forever.

As of 9 February 2020, the fires that had destroyed a huge proportion of the South Coast was officially declared “out”. The Currowan Fire had raged for 74 days and destroyed 312 homes, and spanned 499,621 hectares.

The event had been sold out since mid-November 2019 and a lot has changed within the town since that day. I travelled from Canberra and was expecting to see significant destruction all around. I did, as I got past Braidwood and headed down the Clyde Mountain, through Nelligen and into the Bay itself. However, there was also a great amount of regrowth of the countryside that had started due to the recent good rains and the amount of rolling green hills and growth on the trees made it hard to think it had been a little over two months since that path of destruction.

Amongst this devastation and destruction, it is even more notable that this marks the 5th time that RHST has come to the bay, celebrating their 10th anniversary tour overall.

I arrive at Mackay Park, after walking into and through town from the north side of the bridge along with a large number of punters heading to the concert. Everyone I see or talk to is in good spirits and looking forward to the gig. The entry in is quite large and the crowd is moving quickly. The park is set out well with food, coffee, merchandise and drinks up towards the back. Over to the right of the stage is the normal park clubhouse where the toilets are situated. The park is cordoned off so people know where they can set up and then there is the party pit down near the stage to allow people to come up close and enjoy.

I make my way to the stage area and meet Paul Taylor, the MC for the event, where he is warming up the crowd, giving shout outs to people who are having birthdays, anniversaries, anything. This goes on throughout the day as well as special giveaways that are limited in number.

First up is Boom Crash Opera. Seeing them for my first time in Canberra the night before, I had a good idea of what to expect. The guys kick off with Great Wall and proceed to rip through a 30-minute set including Dancing in the Storm and Hands Up, finally finishing up with Onion Skin. The band is in fine form and look to be having a ball up on stage, sharing their enthusiasm with the building crowd.

Next up Killing Heidi hit the stage and Ella Hooper commands the crowd’s attention, harkening them back to the teenage angsty songs for which Killing Heidi was well known for. The band put on a great set, Ella exploring all parts of the stage, singing and dancing throughout their hits including Calm Down, Mascara and the immensely popular Weir.

MC Paul kept the festivities going with the nice touch of giving away freebies – RHST CDs, t-shirts, stubbie holders, and all sorts of other merchandise – before announcing the Baby Animals to the stage. The pace of the crowd immediately picked up to rock along to Suze De Marchi and co. Playing recognisables such as Rush You, Early Warning and One Word, the band gets the crowd rocking along for their entire set.

The crowd is continues to swell as Paul, ably supported by Ella Hooper, gets everyone in the crowd to dance to Nutbush City Limits. The best dancer has a chance at a $10,000 prize. The crowd all get into it impressing with their moves before a winner is selected. The lucky gentleman gets up on stage and spins the wheel, ending up with a cool $2,500 for his troubles. Paul also brings out some of the personnel from the Rural Fire Service where the crowd is given a chance to thank them for their service. They are also there on a job, indicating they will be collecting donations to help keep them going with essential needs. Paul kicks off that fund with a $2,500 donation, before quickly upping it to $5,000.

The Angels with Dave Gleeson then hit the stage. I caught these guys in Canberra on the Friday night also, so have an idea of the set list. Similar to Friday night, the Brewster brothers make it look so easy. Sam Brewster and Nick Norton play a tight rhythm section that drives the songs along nicely while Dave runs headlong around the stage ensuring everyone in the crowd is singing back to him – especially in Am I Ever Going To See Your Face Again? The crowd responds enthusiastically to say the least.

Other classics pepper the set like No Secrets, Shadowboxer and After The Rain, the latter quite appropriate as during the set the rain came in quite heavy. But nothing was going to dampen this crowd’s enthusiasm.

Before long the rain has stopped and The Living End take to the stage. This is one set I’ve been waiting to see for a while as it has been years since I’ve caught them. They rip through their set with precision, peeling off some of their best: Prisoner of Society, Second Solution, All Torn Down, a cover of Tainted Love, plus End of The World, West End Riot and White Noise. No set would be complete without Scott Owen climbing up on the double bass and slapping away and then later, front man, Chris Cheney running across stage and jumping up on it. Chris also showed us how adept he is playing guitar with a bottle of beer, before skolling what was left. The intensity has lifted a notch.

The last time I saw James Reyne was way back in the mid ’90s. This icon of Aussie rock ‘n’ roll doesn’t sound like he’s missed a beat in all that time. Playing a mix of his solo work and Australian Crawl classics with a classic surfie backdrop on the screen, he is still a brilliant performer. The crowd was treated to songs such as Beautiful People, Daughters of The Northern Coast, Downhearted, Reckless, Errol, Way Out West and Fall of Rome.

Finally, it was on to the headline act – Hunters & Collectors. I had never seen H&C in their first run as there was always something else happening when I had the chance.

The band hits the stage to a massive roar. Mark Seymour has a commanding stage presence and kicks straight into Talking to A Stranger. For the next hour and a quarter we are treated to such a diverse range of songs from across a storied career. This included well known classics such as True Tears of Joy, When The River Runs Dry, Holy Grail, Where Do You Go, Throw Your Arms Around Me, but also lesser known gold (for me, anyway) such as Inside A Fireball and The Slab.

Mark Seymour apologised for being a bit croaky and swiftly settled fears that it was Covid. The band is full of amazing musicians swapping between keys, strings and horns. And at least six of the eight members were singing. I was very happy to have finally caught them.

With the H&C set in the books, the day was finally over and everyone left happy. There’s been some amazing stories of personal triumph in all the call outs as eventually events of the past months were raised. One of the most amazing stories was of a couple who had lost everything in the fires, their pets, livestock, house, but fortunately not their lives. Their friends had not only rallied around them but had bought them tickets to come to this event to try and get a day away from the stark reality of having to rebuild.

Like the landscape as I was heading down to Batemans Bay, the feeling from the day was one of regrowth with a big touch of celebration in it. I have no doubt that like the landscape that has been decimated and is yet ultimately resilient to the worst thrown at it, the Bay will also regrow.

[If you like Paul Kerr’s photos, there’s a huuuuuuuuuge gallery of further Red Hot Summer tour pics – and more! – to be found at Hold Still Photography on Facebook – BOSSMAN SKO]