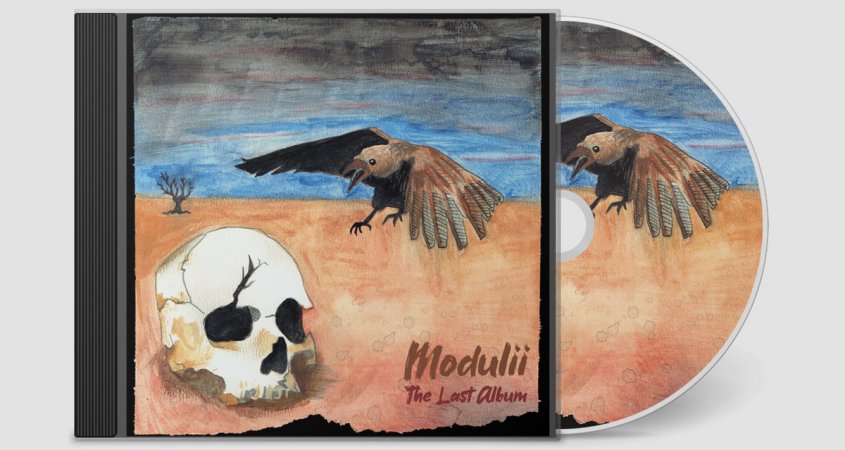 The Last Album is the debut album for Canberra’s Modulii (formerly Teen Skank Parade), a set that’s been a few years in the making. There are some variances in style and treatment but generally, The Last Album makes for quite a persuasive first album.

A listen through every track reveals a kind of bluesy grunge melodic susceptibility married to a doom slash sludge metal aesthetic that’s enriched by a slight broadening of the scope of these styles.

Many of the songs begin with evocative musical passages that take on unexpected and curious turns throughout the course of the song, such as in Doomfist, where a bass introduction leads us, eventually, into a thick intense layer of stoner ooze then segues into a kind of swaggering rock feel that soon becomes a bridge section with an almost cinematic fervour to it.

Another example of these kinds of abbreviated transmogrifications appears in Space Madness, with its cascading electric piano in the bridge. Yes, electric piano. But it all seems to work, giving the album a magnitude that goes beyond the stereotypical traits of metal, adding weight that is not solely reliant on fire and brimstone distortion, confrontational vocals and unapologetic depositions, though rest assured, there is still an abundance of these attributes here.

The album’s opener, Death of The Nightrider, aside from its inspired title, paints a full picture of the rest of the material: thematic introductions, a medium-paced thumping tempo (though on occasions these can hover either side of this middle), the aforementioned blues-like melodic tendencies, tastefully inventive bridge sections, and performances that are steadfast, convincing and often laced with enough venom to be entirely compelling.

One cannot review such a record without taking note of the slip of humour that slides through the crevices, let alone the kind that’s on full display.

The Last Album is well worth a listen for any admirer of metal, and those who might not be but are intrigued by the power of this most persistent of musical styles; and who knows, you could be recruited.

And with lines such as ‘You’re not losing your mind, you just give it away,’ reverberating in your head, you’re sure to feel okay about it.