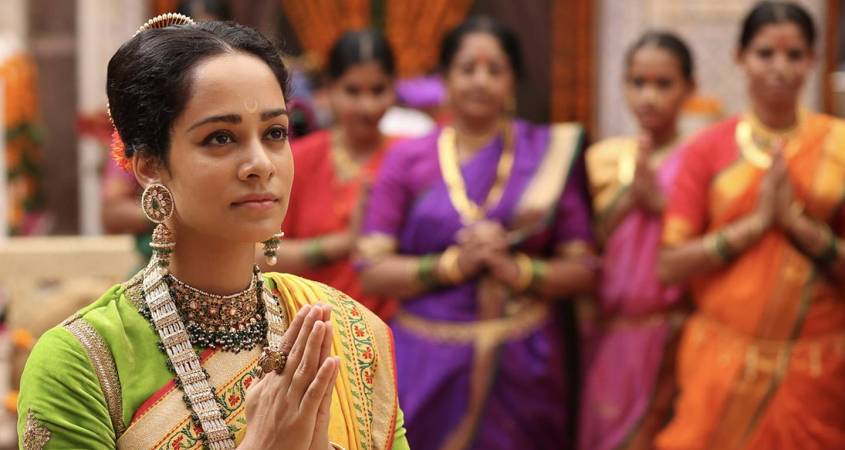 As a girl, Manikarnika (Devika Bhise) marries the Indian city of Jhansi’s Raja (Milind Gunaji), becoming its Rani. When the Rani turns 25, her dying husband adopts a son the day before he dies, ensuring, in accordance with British rule, the kingdom’s continued existence.

Seeing an opportunity with the Raja’s death, neighbouring kingdoms threaten Jhansi, and the Rani asks the British, in the form of the East India Company, for protection from attack. Instead, in ruthless pursuit of profits, the British leave the kingdom undefended — and the Rani learns that the British intend to take her kingdom as it has recently taken 18 others.

The Warrior Queen of Jhansi focuses on the Rani’s response to the threat to her kingdom. Because much of the army is away dealing with border skirmishes, the Rani, herself having been trained in martial arts by her father, Moropant (Tarin Karyekar), since childhood, trains a cadre of women freedom fighters to stand against East India Company’s army. The women are armed with swords and bows and arrows. But the East India Company’s soldiers have been equipped with the latest in weaponry: the Enfield rifle. It is against such odds that the Rani’s people stand with her to defend their way of life when, in March 1857, the British lay siege to the city and bombard it day and night.

The film is in many ways beautiful and true to life, filled with warmly coloured clothing, warm sunlight on the warm brown soils, and the genuine warmth of a close-knit community of subjects of unstinting loyalty. It is difficult to overlook the riches that British greed — greed actively fostered by the British Governor General’s local agent, Sir Robert Hamilton (Nathaniel Parker) — is willing to destroy in the name of company shareholders. And of course the instructions of Queen Victoria via her Prime Minister to shed no more blood than absolutely necessary have little effect, and the British seizure of Jhansi costs the Rani and her people dearly.  But the rebellion that she spearheads is ultimately victorious.