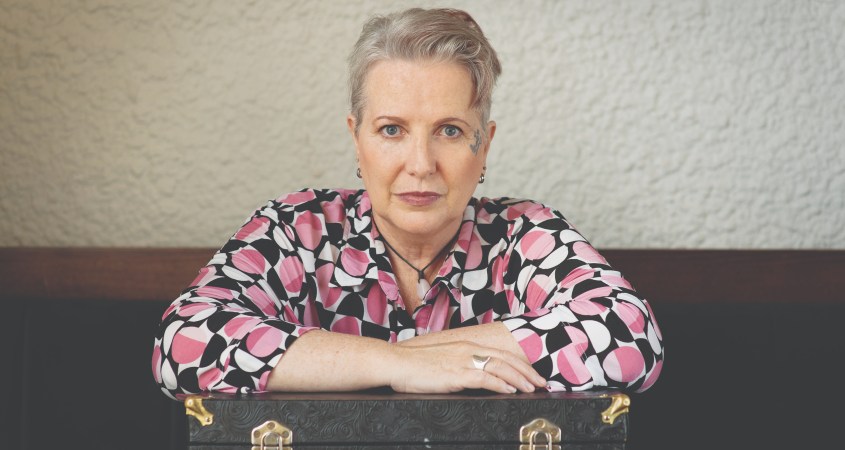 From the minute Dorothy-Jane (commonly known around Canberra as DJ Gosper) walked in on her husband molesting a young child, she knew that every part of her life was about to change.

In the years following this incomprehensible event, DJ’s marriage dissolved, her husband was sent to prison, she was perpetually at risk of homelessness, her car was repossessed, and many relationships in her personal life became fractured, strained, or flat out disintegrated.

And, as you can imagine, after all this, her mental health was not in the best way.

Psychs and counsellors were stunned that she didn’t have to be admitted to a mental health unit to help her cope. During the hardest times, DJ wasn’t even able to respond if someone asked her how she was. Completing a “simple” daily task was a gargantuan achievement. There were spaces in that time where DJ simply has no memory.

“The last song [on the album] is really about how I coped,” DJ says. “And that’s called Rest. Not that I got any decent rest,” she laughs, “but it was more like, I took to talking to myself out loud. It was more a subconscious thing, I didn’t even think about it.

Her 13-track concept album, The Witness, is essentially DJ’s diary of the last few years. This album is definitely not for the faint of heart. DJ honestly, and sometimes graphically, depicts the details of her experience. And while sharing this story is undoubtedly cathartic for DJ, her main hope with the album is to shine light on this extremely difficult and taboo topic.

With the title track, she wants to hold her “dirty, rotten, filthy husband” accountable. With the single, Speak Out, she wants to leave a legacy of hope for child survivors with the message that, “some secrets are not meant for keeping”.

During the recording of this album, DJ got the terrible news that her breast cancer had returned and that it was terminal. Luckily, DJ is receiving treatment that is currently keeping the disease at bay. And while it’s undeniably devastating news, even without considering what the artist has been through in the last few years, DJ is among the most kind, warm and genuine people you’ll meet.

These days, DJ is just trying to find a new normal.

“I’ve found the words. I’ve found ways of being. But it still all feels very surreal.”

Finishing such an intense emotional and artistic project is simply phenomenal. DJ’s courage, resilience, and ability to cope is remarkable. She’s an incredible human and one of Canberra’s hardest working artists. While DJ often wears her heart on her sleeve when she performs, this project will take that to a whole new level. Some people close to her have questioned why she has to release this album, it being such an uncomfortable topic. Her response is simple:

“I don’t feel like it’s out of my system until it’s onto here [the album] and it’s out in the world.”

Due to 2020 being the year that it has been, the launch originally planned to happen in March was unfortunately cancelled. However, now that restrictions have eased, DJ is able to have a few smaller gigs.

The first happened on 6 November at the Austrian-Australian Club and was a huge success. Now DJ will perform two more gigs at Smith’s Alternative on Sunday, 29 November. Due to the current timetabling of shorter shows at Smith’s, each one-hour show (4-5pm and 5:30-6:30pm) will feature a selection of songs from the album.

Yes, the songs talk about the abhorrent act that is child sexual abuse. But together, they tell an incredible story of coping, resilience, strength, and positive change.

DJ hopes that, by telling this story, others in similar situations can be protected, and that it helps others to feel empowered to speak out on difficult topics and situations.

Having listened to album a few times, and having seen DJ perform several times over the year, I can assure you that these shows will be nothing short of remarkable.

Tickets to the upcoming Smith’s shows are $10 and can be bought online via smithsalternative.com

The Witness was recorded and produced in Canberra by David Pendragon and is available on all major streaming platforms. You can read more about DJ and the album via her website dorothy-jane.com

If this article has raised any personal concerns for you or someone you know, here are some services that may help: