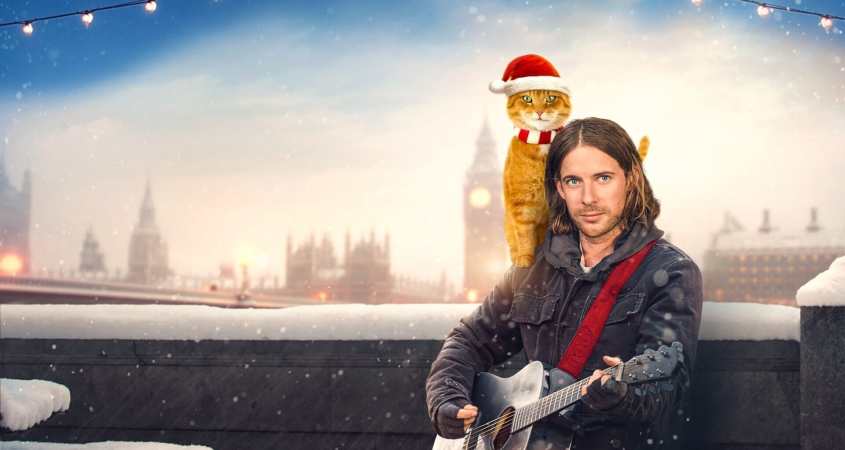 James Bowen (Luke Treadaway) was on the streets for some years, leading up to the events he later describes in the million-selling book A Street Cat Named Bob (2012; made into a hit movie in 2016), in which a cat, Bob (played by himself), saves James from drug addiction.

A little later, established in a flat and uninspired to pen the next book, for which his publisher is waiting, James continues to work on the streets, busking on some days; on others, selling copies of The Big Issue.  Bob and James have attracted much public affection through their busking together, but James has let only one friend into his life: Bea (Kristina Tonteri-Young, in her first role for the big screen), who volunteers for a charitable food outlet.

James’s and Bob’s lives are relatively stable, but they have had previous run-ins with a council inspector, Leon (Tim Plester).  Having overstepped the mark one day in his resentful desire for power over others, Leon is shifted into Animal Welfare, assisting Officer Jarvis (Areth Ayeh) — and, once there, persuades Officer Jarvis to investigate Bob’s welfare in being out on the streets with James.

As well, James appears to be the target of another Big Issue seller, Mick (Celyn Jones), and begins to feel altogether hemmed in and in danger of losing his best friend to Animal Welfare.

A Gift From Bob contains many touching scenes. Whilst Treadaway doesn’t easily convey the ready warmth of James Bowen himself, his connection with the real Bob is a joy to see, and the resolution of several personal relationships makes this Christmas-themed tale one that will suit the season very well.  Despite publicity statements mentioning that this is their last Christmas working on the street, the film contains no such suggestion, and I hasten to assure you that when last seen in the film, Bob was alive and well. The film will leave you uplifted and sympathetic to the nearly invisible work of those reliant on the generosity of passersby.