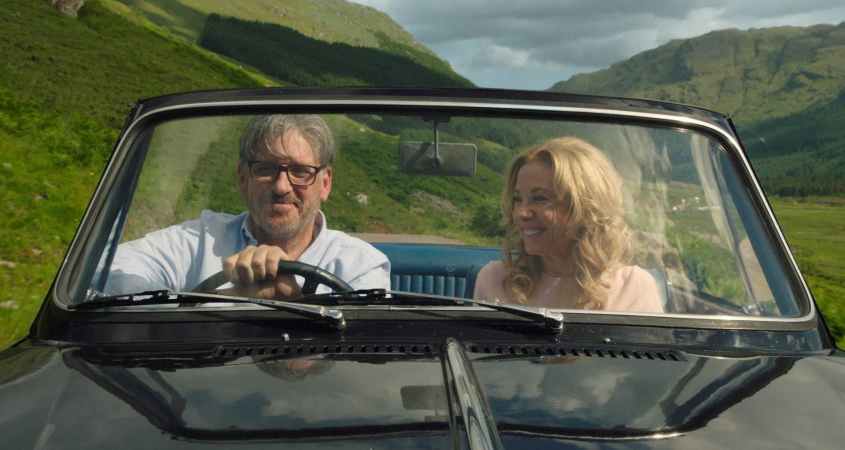 Annabelle (Kathie Lee Gifford), living in Nantucket, U.S.A., and widowed a year earlier, begins a tour to 20 countries, fulfilling a promise to her deceased husband. First stop is an old Scottish castle that its owner, Howard (Craig Ferguson), has turned into a bed-and-breakfast.

Howard’s brand of humour, though he means to be welcoming, doesn’t at all suit Annabelle; more to the point, he is shockingly insensitive to the delicacies of her grief. She loves the place and Howard’s dog, Wally, but Howard’s attempts to jolly her along with sourpuss Scottish humour do little beyond freshening her wounds.

Of course, you can guess what eventually occurs. Along the way, but amazingly late, Howard realises that the attitudes of the woman he is about to marry, Clare (Elizabeth Hurley), are incompatible with his own — as his best friend, Gavin (Ford Kiernan), has gently pointed out to him several times.

The tale rests firmly on so many thin contrivances that afterward you’ll realise that it leaks like a sieve. But, if Howard’s insensitivity doesn’t jar you out of it, it works and can be surprisingly moving, largely due to Gifford’s subtle cues as to her fragility and the devastation that the loss of her husband caused her. The cinematic Scottish views, probably warmer and brighter than in life, don’t hurt a bit either.

Kathie Lee Gifford is well-known from TV serials, but this is her first feature-length script to be produced, and seems to be her first venture into film. Extraordinarily, she not only starred in this role but also wrote the screenplay, co-produced it, sang on all six songs complementing the soundtrack, and, at least on the film itself, is credited with having co-written all six songs with Brett James, who also sang those songs, composed the soundtrack, and had a minor part.

The film marks something of a breakthrough for Craig Ferguson too. A long-established comedian, Ferguson has a solid career as a TV actor; Then Came You marks his first appearance (i.e., excluding voice-acting roles) on film in more than a decade, and the film is worth seeing merely for its capture of his deadpan comedic performance.