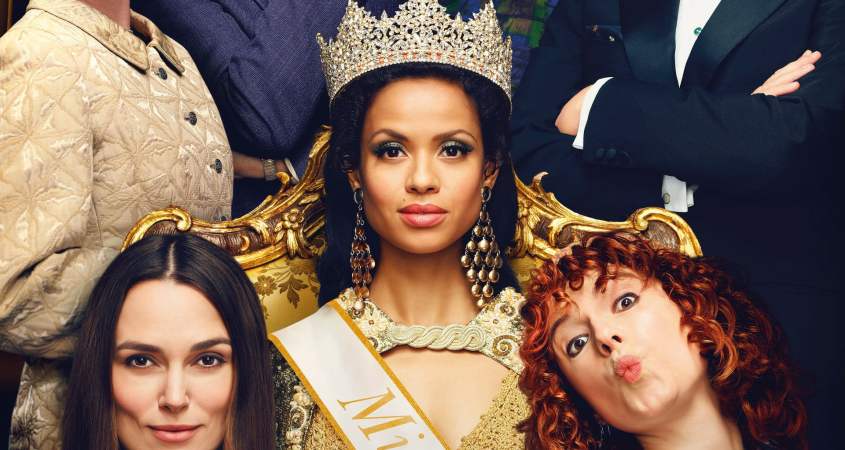 Eric and Julia Morley (Rhys Ifans and Keeley Hawes) have been running Miss World for decades. Womanising entertainer Bob Hope (Greg Kinnear) has been asked to compere the 1970 competition, and does so — having let down his wife, Dolores (Lesley Manville), the last time he did it. In the lead-up to the televised event, university history student Sally Alexander (Keira Knightley) runs into a group of misfits loosely affiliated with an emerging movement called the Women’s Liberation Movement.

Sally has no great personal issue as a woman, the father of her child being an ideal partner, but she is routinely interrupted and spoken over in tutorials. But when the movement’s plan to covertly organise a demonstration against the Miss World event is derailed by the local group’s publicity, the group nudges Sally into representing the cause in a television interview.

It’s when that interview leaves the movement marginalised that Sally suggests buying tickets to the event in order to protest from the audience — which Bob Hope inadvertently triggers by remarks that must have had a dehumanising effect on the women of the day. And that’s where the fun really begins and the movement’s stance becomes visible to the hundreds of millions watching the event around the globe.

Basing its story on the actual events of the time and the people involved in them, Misbehaviour manages to contrast the societal norms of the 1960s with those of today without having its characters preach. More impressively, handling the political potatoes (hot even today) well, it manages to give those involved in the women’s movement a hint of originality and interest. Writing, direction, and acting recapture with little caricature a culture blind, as ever, to its own limitations.