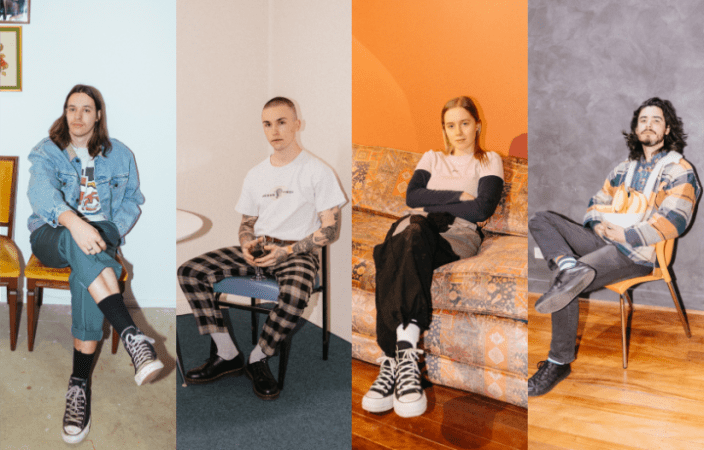 It’s not every day you that you get to listen to a track inspired by a novel. Tim Winton’s Breath, no less.

“The lyrics are inspired by Tim Winton’s coming of age novel, Breath. It’s a story about growing up and navigating through the changes that come with new and old relationships.”

Formed in 2018, the four-piece alternative rock band has quickly established quite a reputation for delivering emotive, high-energy performances.

They have also garnered a notable list of achievements including the prestigious title of Triple J Unearthed Feature Artist, June 2020, surpassing 200,000 streams on Spotify, and sharing the stage with some big guns on the Australian music landscape including Ball Park Music, Joyce Manor, British India and Kingswood.

What we get with Rolling is a stirring mix of abandon and observation, with Nette’s sinuous vocals frontloading slick hooks in a raw style. The guitar parts here are also jostling for position and harnessed to the lurching feel of the drums, the fulminating sonics. The picture is indeed a bright one and harmoniously aligned to the moment.

The peaks are here, slathered between the disrobed verses, yet these climaxes, as melodically persuasive as they are, are merely the amiable antecedents to the post-bridge assault, complete with feel change and mood change. It is the kind of moment one hopes to hear at a live show, threaded to the in-between bits, a fully nourished band letting rip.

Part of the appeal of this second apogeeic moment is the arrangement; the aforementioned hooks never get another round. Ah, keep the punter primed to the end. Rolling is idyllic, peppered with power-pop bursts, as well as nuanced and littered with unburdened, modest finesse.

And it sounds like Breath has induced more than just the lyric conceit; it sounds as if the performances, the intentions, have all emerged from out of the depths of some boundless, pelagic entity.

The track’s the track’s pre-save link is https://gyro.lnk.to/Rolling