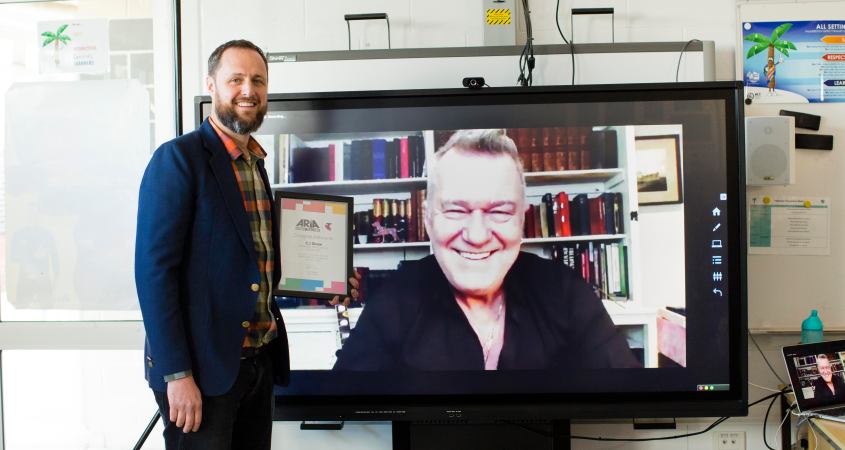 It’s not everyday you get a video call from Jimmy Barnes telling you that you’ve won an ARIA award.

So when CJ SHAW walked into his Palmerston Primary School music class one Wednesday morning in early October, he got the surprise of his life.

“You could have knocked me down with a feather!” Shaw beams.

The Telstra ARIA Music Teacher Award is now in its fourth year, and CJ Shaw has been nominated as a finalist along with three other music educators from around the country.

The award was launched in 2017 in partnership with The Song Room (a national organisation providing tailored high-quality music and arts programs for disadvantaged kids) to recognise the incredible contribution that music teachers bring to the lives of their students.

Shaw himself recognises the positive influence music educators had on his life from an early age. His Year 4 teacher, Jim Low, had a huge impact on him as a kid.

“He was a great musician and he just got us singing,” Shaw reveals. “And he’s still doing [music]. He’s an excellent folk singer.”

Another influence for Shaw came later in life when he got to know the late John Dengate, a folk singer and songwriter, and primary school teacher of 30 years. It was from befriending Dengate that Shaw was able to see the connection between songwriting, artistry and education. Low and Dengate in particular had a profound positive impact on Shaw – as a six-year-old and later in life as a 28-year-old.

Shaw began his music teaching career five years ago, but teaching and music has been around him all his life.

“I love education,” says Shaw. “My parents are teachers, my brother, my sister… We’re all teachers.”

As a songwriter and touring musician for more than 20 years, this particular ARIA Award could perhaps not be a better fit for Shaw. While he still performs around town as an artist, Shaw says he enjoys the process of “putting the pieces together” as a music educator.

“I try to come in [to teaching music] at a lot of different angles”, he says. “We sing songs, we get the ukuleles out. [The kids] just really respond to that chance to kick out the jams.

Shaw’s observations are not just anecdotal. In fact, children involved in music at school achieve better grades, attend school more often, and have improved confidence and self-esteem. For more information about the benefits of music education head to songroom.org.au.

Voting for the Telstra ARIA Music Teacher Awards closes on 19 November via aria.com.au/vote ahead of the televised award ceremony on November 25. Vote as many times as you like!

And to coincide with the last days of voting, CJ is putting on a series of shows this coming Sunday at Smith’s Alternative. Show times are: 4pm (G rated), 6pm (PG rated) and 8pm (M rated… Ooo la la!).

Good luck CJ! Canberra is cheering you on!

One thought on “SHAW up your vote for this beloved Canberra teacher!”