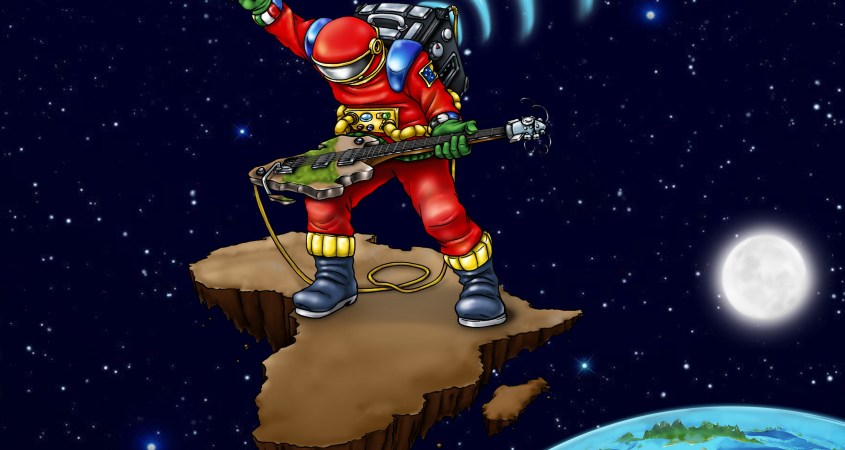 Canberran writer and musician Spaceman Africa’s curious history would usurp most of the oxygen of this review if one allowed it. Followers of the Spaceman have compared his music to Lou Reed and Bob Dylan, which is quite a call, but nonetheless Spaceman is gearing up for the release of this six track EP I Never Felt So Alive and the accompanying events, of which I will endeavour to provide some of the details.

The EP launch will be an online event spread over seven days featuring exclusive content. Each day will feature a different song. To be a part of the launch, you need to register with your email address, and on each of the seven days, an email will be sent to the people who have opted-in, a link to new and never before seen content, such as music videos, live performance videos, interviews, photos and behind the scenes footage.

There will also be a competition to win a bundle of Spaceman Africa The Musical merch. There will not be a release of the songs or music videos onto the internet or streaming services until next year.

This is the webpage where people can go to register for the launch and submit their email details: mailchi.mp/b5be49aa1d9a/ep-launch-experience.

At a glance, that is, upon first perusing the titles, one assumes a humour-laced musical ride is what is in store for us, and for the most part that is correct. This collection is eclectic, despite the fact that it operates within a constrained genre, one that is primarily raw sounding, guitar shepherded and performative-based, it is eclectic and vaguely subversive; yet it’s a deconstruction that’s imbued with an unadorned theatricality, which is expected I suppose, when considering Spaceman’s label of musical to describe his EP release.

There is a varied series of moods here, an array of constructs that will amuse, entertain, and perhaps even beguile, and this is no doubt the intention.

A grab bag of musical flavours is consolidated by Spaceman’s transmuting vocal and a spread of narratives underscore these performances; one that refers mainly to the stylistic tics of rock but is not averse to adopting a few folk traits.

For those who want to witness the spectacle of Spaceman Africa first-hand there are two upcoming live shows planned: Friday 13 November  @ The Basement Belconnen supporting Jimmy Plants and the Kashmir Pants and Thursday 26 November @ Smith’s Alternative as part of their Band, Beng, Bing, Bong, Bung evening.