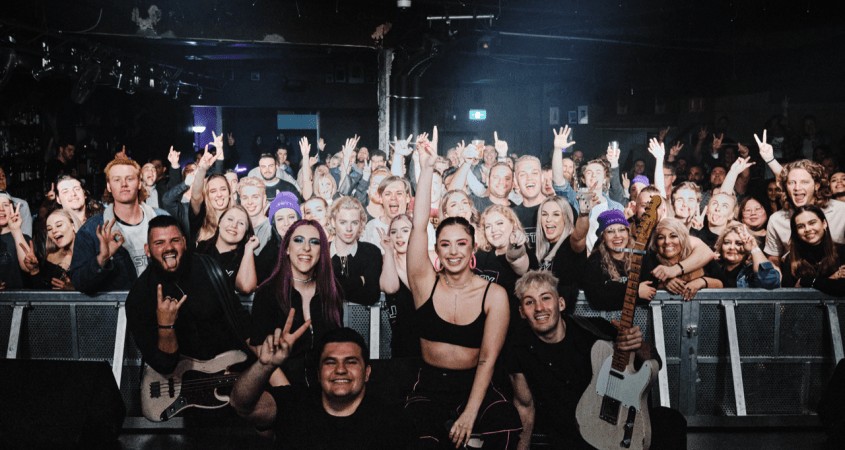 Perth based band TSTY has just released Over You, a slick sounding reggae flavoured pop track that feels like a natural progression for the band without seeming like a conscious attempt at softening its appeal for the sake of mass exposure.

Their last single Broken was an alt-pop track which neatly blended pop and R&B and sprinkled it with a little indie-rock edge. Subsequently, the band received some healthy attention for it.

Over You is a slight departure from that track and one that perhaps might be wise, both stylistically and professionally. Working under the guidance of one of John Feldmann’s engineers, Michael Bono (Blink 182, The Hunna, New Politics) and having renowned LA producer Zakk Cervini (5SOS, Machine Gun Kelly, Yungblud) mix and master the track, the band was inspired to flex their creative muscles and Over You is the result.

TSTY, who are Chez Watson (Lead Vocals), Claudia Calabrese (Keyboard/Vocals), brothers Reece (Guitar/Vocals) & Caleb Lenzo (Bass) and James Papanaoum (Drums), met at a local music school in their hometown of Perth and have been writing, recording and performing together ever since. A defining feature of TSTY’s last single Broken was its full-throttled fizzing pop chorus, a high that was wedged between subdued verses and a contemporary R&B pre-chorus, and Over You attempts to retain this characteristic of chorus supremacy but with a more restrained musical undercurrent.

Forgoing the indie rock elements of Broken, such as the straight muted guitars and a drum kit’s snap and crunch, for a less intrusive sonic presence works well for the kind of melodic direction Over You takes but for this reason the new track is also less immediately rousing.

Indeed, the lead vocal performance is just as impressive and certainly on a par with any number of current global pop princesses’ efforts, but the song is an altogether different kind of animal; it cruises, not imposes; it luxuriates in its own wealth of studio kinetics; it doesn’t demand, yet it’s quite seamless and spruced.

And no doubt these are just the kinds of tactical engineering feats needed to allow TSTY to not merely achieve a respectable chart placing but a notable form of media impact.