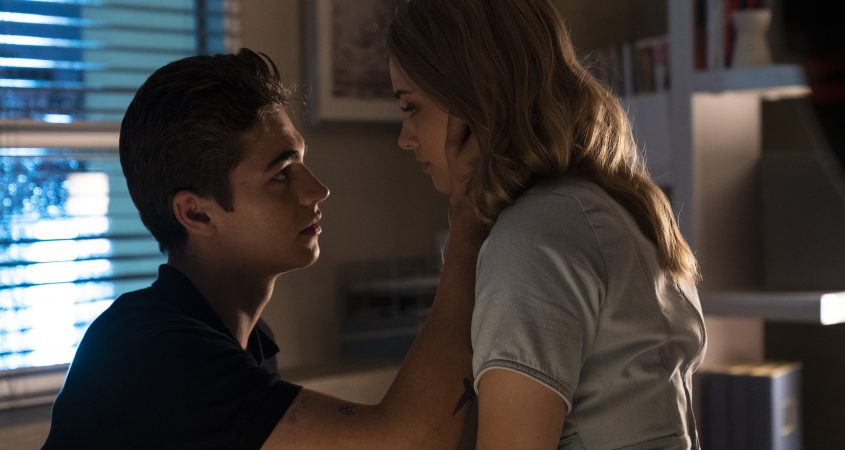 After We Collided follows After (2019, on the basis of a 2014 novel by Anna Todd), in which Tessa (Australian actress Josephine Langford, in her first feature-film role) in her first year of university meets and, after a rocky start, eventually pairs up with Hardin.

At the start of After We Collided, Hardin (Hero Fiennes Tiffin) has been without Tessa for a month, having driven her away, and Tessa will not return his calls. Tessa has landed a paid internship in book publishing, where her boss soon recognises her talent for highlighting a good writer and she makes fast friends with some co-workers, one of whom may have more than platonic feelings for her.

From there, boulders and plotholes litter the path of true love between Tessa and Hardin. Tessa’s readiness to disbelieve in Hardin’s sincerity mightn’t be enough to capsize the relationship, but Hardin’s petulance, short fuse, and doubt in Tessa’s love for him are.

As if that isn’t enough, Tessa, though wanting only Hardin, somehow manages to kiss two other young men, adding fuel to Hardin’s explosiveness, with the result that the relationship revives several times over only because they can’t keep their hands off each other.

For its target audience, although it depicts no solid basis for a lasting relationship, After We Collided offers several insights into how our poor behaviour or bad faith can affect those on the receiving end of it — the ways in which students and friends in their early twenties interact demonstrating that simple civility, genuine kindness, and humility have no place in a “nice guys come last” culture. And it amply illustrates the costs of addiction (in Hardin’s case, turning to alcohol in response to loss) both to the addict and to those who love him.

In the end, though, After We Collided is a happy tale. If its script lacks finesse and surprise and heavy American accents made occasional lines difficult to pick out, it is nonetheless well acted and well shot. Its forthcoming sequels, After We Fell and After Ever Happy, also based on Todd’s novels, will — assuming they offer the actors enough scope — undoubtedly launch Josephine Langford and Hero Fiennes Tiffin as two to watch.