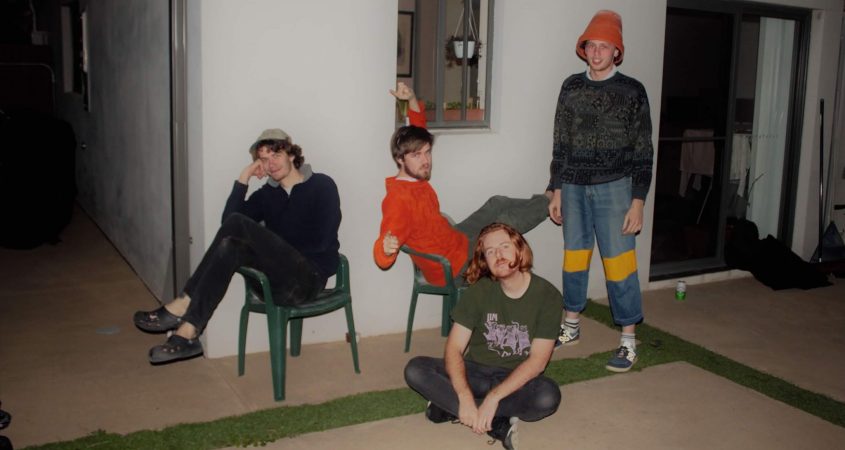 Canberra-based indie-rock band Paint Store has just released their debut album Maybe. Formed a couple of years ago the band made its debut performance at Mulgara’s No Front Fences festival in March 2019 and since then have gone on to share the stage with touring bands including Majak Door, Destrends, and Canberra’s Teen Jesus and The Jean Teasers.

Most of the tracks on Maybe eschew typical song structures, preferring to rely on a quiet onslaught of irascibly jangly guitars, disjointed rhythm and a miscellany of textures that seem to be the optimum backdrop for Liam Smith and Pat Johnson’s soft punk nonchalance (Pat Johnson singing on the tracks Carseat Haiku and Dish Pig, with Liam Smith as the vocalist on all other tracks).

The opener Damage Report sets the temper and the mood of the album, with Smith’s indifference the locus around which the band’s accents and unpredictable acts of dynamism flitter.

The album is sprinkled with tracks that gather momentum robustly and surprisingly such as Carseat Haiku, People People and Patience while others, like the closer Yonder, seem to wander in a sonic effluvium of quasi-dissonance and swampy atmospherics.

The raw veracity here is disarming and curiously charming in equal measure, and there is a consistency of style and aesthetics that’s difficult to ignore. It’s not the up-in-your-face mode of punk happening on Maybe but more of a kind of punk brooding. And if there is a structural pattern to Paint Store’s artful insouciance, it’s noticeable in the method by which some of the songs ascend into an erratic blur, one that seems to confirm the alienation that precedes it.

But there is also an element of amusing playfulness here, particularly regarding the track Dish Pig. The energy level is maintained throughout this debut set of songs, and it is this aspect and Johnson’s bewitching vocal performances, which sometimes veer into agreeable badinage, that linger long after.

And that is, indeed, an admirable feat.